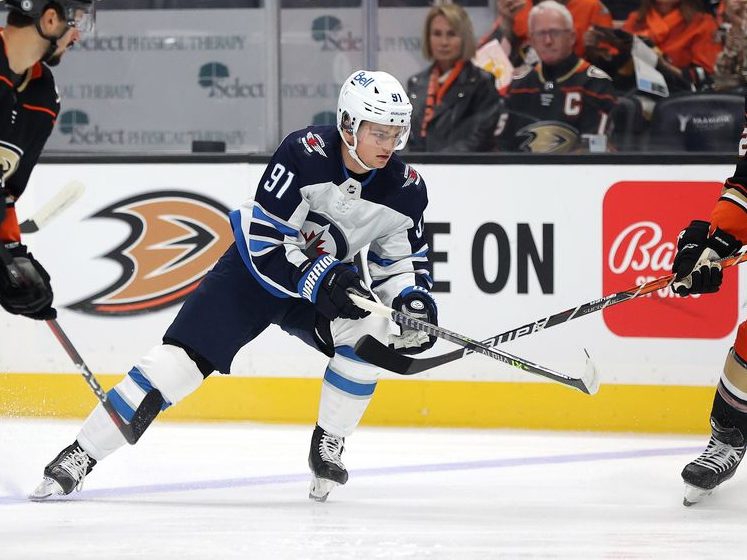 Cole Perfetti #91 of the Winnipeg Jets skates the puck against Kevin Shattenkirk #22 of the Anaheim Ducks in the first period at Honda Center on October 13, Photo by Ronald Martinez /Getty Images North America

Perfetti was one of 35 players to be handed a selection camp invite by Team Canada on Wednesday, with camp beginning on Dec. 9 and running through Dec. 12 in Calgary.

The 19-year-old, who has six goals and eight assists in 15 games with the Manitoba Moose so far this season, is a lock to make the roster after an impressive showing last year and being one of only three returnees from last year’s squad.

That squad fought its way to the gold medal game in the bubble in Edmonton but fell short of the annual expectation after being blanked 2-0 by the Americans.

“There is a lot of redemption from last year. Still have that feeling in my gut of losing in the gold (medal game) to the U.S,” Perfetti said during a Zoom call with media Wednesday following Moose practice at BellMTS Iceplex. “There’s a lot I want to accomplish this year, and coming back and winning a gold medal is the most important part of that, obviously.”

With a Jan. 1 birthday, Perfetti will turn 20 at the tournament and is the oldest player by 11 days. But it’s not just his age and his previous experience in the tournament — he scored twice and added four helpers last year — that has him primed for a massive role for Canada.

Perfetti is now in his second season in professional hockey thanks to the Ontario Hockey League shutdown last season and a special exemption for players this season that still have junior eligibility but played in the American Hockey League when the OHL was on hiatus due to the pandemic.

Perfetti is just one of two players on Canada’s roster with that resume. Defenceman Donovan Sebrango, a Detroit Red Wings prospect who will turn 20 on Jan. 12, 2022, is playing with the AHL’s Grand Rapids Griffins.

“Me and (Sebrango) have been fortunate enough to do that the last year and a half. I think that’s big for us, and adds to what we can bring, what we can add and what we can learn,” Perfetti said. “There’s lots of the guys in the team that have played in the NHL this year that are on that roster… (Mason) McTavish and (Jake) Neighbours, lots of guys went to NHL camps and all that kind of stuff. There’s a lot of pro experience on this team, while as much as you can get for a world junior team, I think. That’s going to be an advantage for us. There’s lots of guys who’ve played pro and know what it takes.”

Perfetti spent all of training camp with the Jets ahead of the 2021-22 campaign, and stuck with the team, playing a part in two games, before being sent back to the Moose on Oct. 21.

Given his rise in the AHL ranks, and the downgrade in competition, even at the premier junior tournament, there was some question as to whether or not the Jets would give Perfetti and Team Canada their blessing to send the Whitby, Ont., native to the tournament.

Perfetti’s inclusion on the roster answered that question as Canada goes for a 19th title.

“Obviously, my mind is here. This is my team,” Perfetti said of the Moose. “This is who I play for and it sucks to have to pick up and leave for a month of the season, but that’s the beauty of this team. Everyone is happy for me to go.”

Last year’s tournament was played behind closed doors due to COVID-19.

No fans. No atmosphere.

This year’s rendition is back in Edmonton, with fans — all fully vaccinated — and with Red Deer serving as a second venue.

Canada, in Group A along with Finland, Germany, Czech Republic and Austria, will play all of its round-robin games at Rogers Place. Group B, which includes the U.S., Russia, Sweden, Slovakia and Switzerland, will operate out of Westerner Park Centrium in Red Deer.

“I mean, that’s what you live for as a hockey player. The whole country cheering you on, 20,000 people in the building. And that’s just… I think it’ll give you goosebumps the first time the crowd goes nuts or the first time you come out for the opening game and the building’s full. I think it’s gonna be pretty special. So it’s hard to expect what’s going to come, but I’m looking forward to it. And, you know, hoping the fans are going to be rowdy.”

As for himself, Perfetti is certain of one thing.

“My game is at a much better place than it was a year ago today,” he said.

The 2022 tournament kicks off on Boxing Day, with Finland facing Germany before Perfetti and the Canadians take on the Czech Republic in primetime.