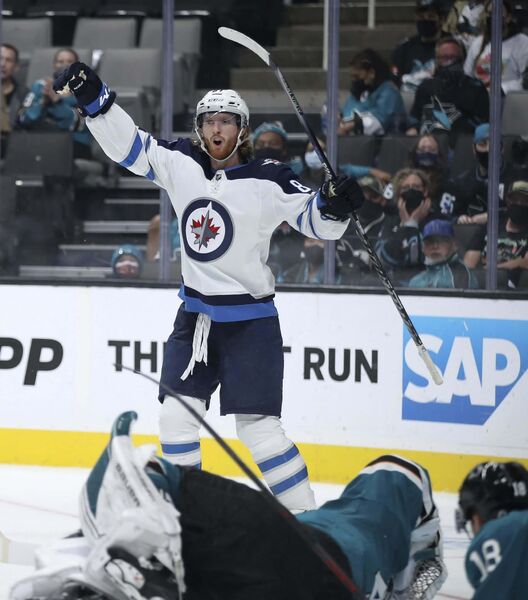 Kyle Connor is taking over the spot once occupied by the most lethal power-play sniper in Winnipeg Jets 2.0 history.

The Michigan-born left-winger was stationed near the left faceoff circle Thursday as the Jets did some intense work at Canada Life Centre to energize their anemic play with the man advantage.

To say the special-teams unit needs a reversal of fortune would be a huge understatement.

Pierre-Luc Dubois, who has 11 tallies this year, was added to the first unit in an effort to created some net-front havoc, while Connor, who leads the club with 14 goals, replaced Nikolaj Ehlers at the prime shooting position made popular by Patrik Laine.

Laine was a right-shooter and made a name for himself blasting one-timers from that very spot.

But head coach Paul Maurice figures Connor, who has just a pair of goals (both coming in a 4-2 win over the Calgary Flames last Saturday) during the team’s recent 1-5-1 slide, can connect from that location as well.

It’s a strong demonstration of positive thinking from Winnipeg’s long-time bench boss, however, the reality is he’s likely ready to try just about anything at this point.

The Jets power play went 0-for-6 Monday night in a troubling 1-0 loss to the visiting Arizona Coyotes, and is now producing at just 16.9 per cent, which ranks 22nd in the NHL. Winnipeg has scored just once in its last 23 man-advantage opportunities.

Yanking Ehlers, who hasn’t exactly been his electrifying self as of late, off the top group was a starting point.

“I wanted to put Nikky there originally, out of respect for him and what he can do and the minutes and give him the chance, but it didn’t make him or the power play better,” said Maurice. “(Put) Kyle in that hole, I’ve never used before. We didn’t need to in the past because we had a right-handed shot (Laine) over there. And if you don’t have a right-handed shot over there, it changes everything about how you move.”

Neal Pionk continues to man the point, while Mark Scheifele sets up in the slot and Blake Wheeler patrols the right wall. Both veteran forwards are struggling and would welcome some production when the New Jersey Devils visit Friday night and the high-flying Toronto Maple Leafs stop by Sunday night.

Wheeler, still without a goal in 17 contests, is scheduled to play the 1,000th game of his career Sunday.

“It’s almost Day 1 today of a pretty significant change of how we’re going to move in the offensive zone. Pierre-Luc net-front, 6-5, 220 (pounds) …we need to get the puck there more often. And Mark over the years is an elite slot shooter if we can find a way to get him the puck. You need more options around him to get him the puck,” explained Maurice.

“So, a bit of a change with that unit, it’s going to be a bit of a work in progress, but even in the short sample size (Thursday’s practice) Kyle banged a couple in and there was more action around the net than what we’ve seen for a while. You put those five guys on the ice, the skill level they have, they got to be on the same page and they’ve got to be rolling.”

The Moose have a new head of the herd.

Manitoba veteran defenceman Jimmy Oligny will serve as the 11th captain of the American Hockey League team, while forwards David Gustafsson and Cole Maier have been named alternate captains.

Oligny, 28, has a pair of goals and three assists in 18 games this season, his fourth with the Moose. The St. Michel, Que., product has appeared in 399 career AHL games , including 124 games with the Jets’ minor-league affiliate.

Gustafsson, 21, is tied for the Moose lead in scoring with five goals and 14 points in 18 games. The Swedish product was named the squad’s MVP for the 2020-21 season campaign.

Maier, 26, has five goals and nine points in 18 games. The Pequannock, N.J., product has played 111 games with the Moose.

Jason Bell wanted to be a lawyer when he was a kid. The movie The Paper Chase got him hooked on the idea of law school and, possibly, falling in love with someone exactly like Lindsay Wagner (before she went all bionic).