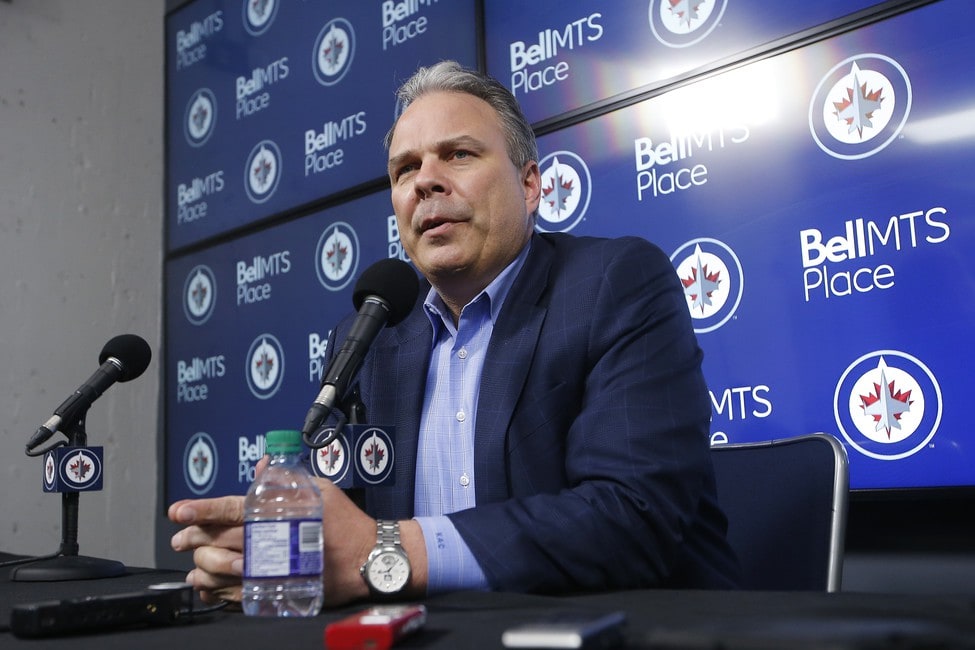 Just a few days ago, the Winnipeg Jets added some fresh faces to their roster for the upcoming season. Dmitri Rashevsky, a 20-year-old Russian-born winger, was one of these players, selected 146th overall in the fifth round of the 2021 NHL Draft. His adaptability, puck-handling skills, and scoring abilities all make him a worthwhile pick for Winnipeg.

This was not Rashevsky’s first draft – it’s actually his third. Being passed over in the NHL draft not once, but twice and then being drafted the third time is definitely rare, but the Jets’ GM Kevin Cheveldayoff is confident that not being selected in 2019 and 2020 will only drive his play-making abilities.

In the Jets press conference on Day 2 of the 2021 NHL Draft, Cheveldayoff stated, “I think it’s a special thing for those kinds of players that get passed over a couple of times. There’s a little bit of a chip on their shoulder so, I think there’s a lot of skill, can play either wing, six-foot-one, but I think there’s still room to grow into his body.”

Rashevsky played most of the 2020-21 season with Dynamo St. Petersburg in the VHL (a professional ice hockey league in Eurasia, also the second-highest level of hockey in Russia). In 24 games he totaled 16 points, 11 goals, and 5 assists. The winger also played nine games in the KHL (Kontinental Hockey League) last season where he earned an assist.

Most impressive was the forward’s 2019-20 season. Playing in the MHL (Junior Hockey League) for Dynamo St. Petersburg, Rashevsky scored 44 goals, finishing first in the league in goals scored and second in points with 74.

What’s unique about Rashevsky is he’s not just a goalscorer, he’s also an exquisite playmaker.

Puck-handling is Rashevksy’s strong suit, the goal-scoring is an added bonus that isn’t too bad to have on your team either. As you can see from the highlight reel below, dangling around players with immaculate control comes second-nature to the winger.

Not only is he protective over the puck, but his ability to stick-handle makes creating open ice easy as he sets up sweet plays for his line-mates.

But again, his motivation to score still shines as his five shots per 20 minutes in the 2019-20 MHL season was one of the best averages in the league.

Areas to Improve: Skating and Strength

Being drafted at 21 is late compared to the typical NHL draft picks. The downside to being drafted at a later age is it makes for less time to develop at the NHL level compared to younger draftees. Rashevsky needs to work on his skating which has been about average among his teammates.

Skating is something that can improve with age, and hopefully that will be the case here.

On Day 2 of the 2021 Draft, Cheveldayoff touched on the areas that the forward could improve on while insisting his successful seasons and experience playing in different leagues would be an asset to the Jets.

“…obviously he’s gone through the draft twice, he’s kind of a late bloomer physically, he’s still got some ways to go with respect to getting bigger and stronger. But watching a ton of video on him and just seeing the progression that he’s had and the breakout year with 44 goals two years ago but not getting drafted and watching him play in the various different leagues … We just kept coming back to why not draft this player?”

Rashevsky is 6-foot-1 and 165 pounds, fairly small in stature for someone of that height. The hope is as he continues to train and play in the NHL, the winger will build up his strength and improve his skating.

I’d assume based on being drafted 146th overall, if Rashevsky cracks into the Jets lineup next season, he will find himself slotted within the bottom two lines until coach Paul Maurice can figure out where he fits best.

However, could he be the missing piece to Pierre-Luc Dubois’ success? After being acquired from the Columbus Blue Jackets, Jets fans were excited to see how the 23-year-old would elevate their team. Saying they were let down would be an understatement. Scoring only nine goals in 46 regular-season games played, Dubois was practically invisible last season.

While highly unlikely for the draftee’s first NHL season, if Maurice does give Rashevsky the opportunity to play with some of the Jets’ big names like Dubois, he may have the potential to elevate their game. Maybe No. 13 could use the spunk and finesse of a newbie to add some flame to his fire.

What are your thoughts on Rashevsky? Do you think drafting the forward was a good move? Should Maurice give Rashevsky the chance to play with the Jets’ big guys? Let me know in the comments!

Courtney is a 22-year-old recent graduate from the University of Western Ontario, earning her Honors Bachelors of Arts degree in Media Information and Technoculture and will be completing her Master of Media in Journalism and Communication beginning in September 2021. She combines her longtime love for hockey, journalism, and sports media as she covers the Winnipeg Jets and Boston Bruins for The Hockey Writers.