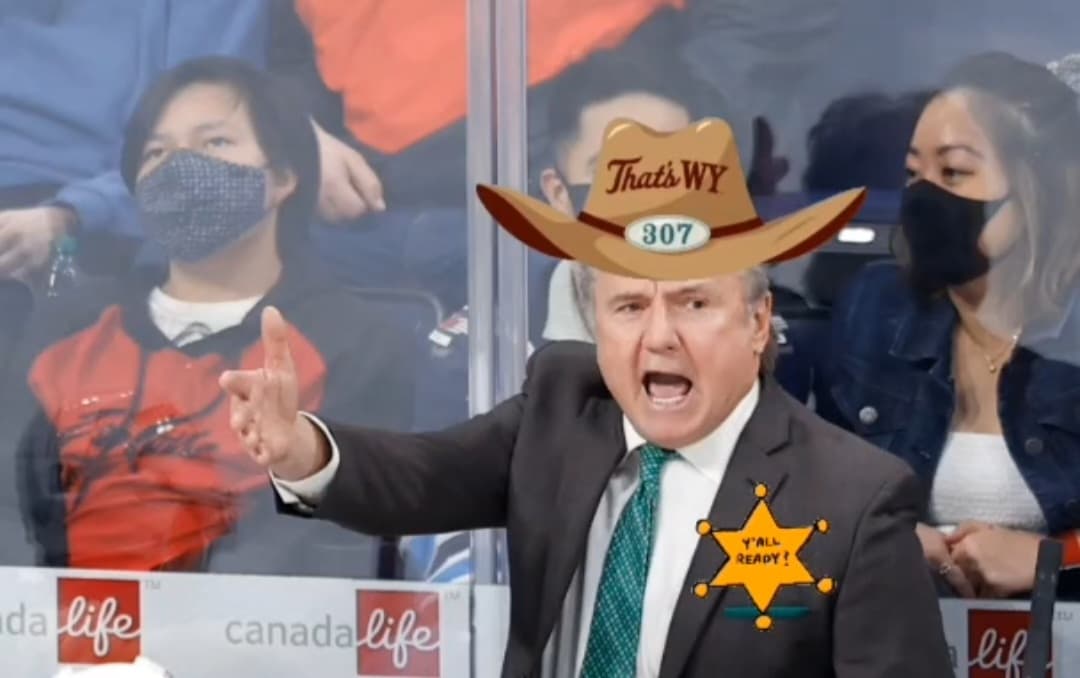 I saw poll on twitter this afternoon done up by a local radio station. The question was a long the lines of “Do the Jets make the playoffs?” 52% of people who responded said “It’s going to be a long season”.  The folks who I follow on Twitter have been getting more and more optimistic. With more than 50 percent of the voters on that poll saying the Jets won’t make the playoffs I’m sitting here wondering why people are down on the Winnipeg Jets. Let’s look at the Jets and why they should make the playoffs this year.

Sheriff Bowness and his mullet

I love Rick Bowness the guy has been in professional hockey for 47 years and hasn’t won a championship yet he is out there year after year. The guy could retire but I think he won’t quit until he holds the Stanley cup in his hands. You’re going to look me in eyes and tell a 47 year long journey is dedication. Bowness isn’t here to screw around it was either retirement time or time to win a cup he and many of us can wholeheartedly look at this roster and say yeah that’s a roster with a ton of talent. If you haven’t seen any of Mark Scheifele’s interviews from over the summer or his recent media avalibities that guy is buzzing with excitement, I think we might see the best work of his career. The one thing that got me with Scheifele was that he was excited to get a phone call from his head coach during the off season. That sort of respect hasn’t been shown to him as a pro and it clearly has positive effect on him. We will see how good he is come the middle January but the hear the excitement in his voice and how he is speaking it’s a lot of positive candid talk.

Bowness is bringing a new culture to the Jets locker room. He wants guys to be excited going into the rink on a daily basis. He’s not afraid to bark at the players if they aren’t playing up to their potential. Coming in and taking his time to strip Blake Wheeler of his captaincy is one of many culture shocks this team needed. Bowness has come into town has seen that the skill is here and he needs to shake things up. He’s really shaking things up by allowing his defensemen to shoot more which hopefully leads to more goals.

Finally it looks like Bowness is starting to grow a mullet. I’m not saying having a neck blanket will bring your team success but have you seen an NHL coach with mullet? I haven’t and something like that might be enough to please the hockey gods just enough to give the Jets a few bounces.

Rick Bowness has come in kicked the doors open and started cleaning up the mess from the old authority in town and brought his own style. I respect the new coach and all that hes brought in early.

This was an important off-season for the Jets. It was either going to make or break them as a unit and from what I have seen from social media was this was a great off season for the players.  Going to weddings, lots of training and working on the little things we think should just come natural to professional athletes. It seemed like a weight was lifted off of everyone’s shoulders this summer it was a long last half of the season for the Jets last year. They were constantly chasing the final wildcard spot,when they would get close they would buckle under pressure. Everyone agreed it was a disappointing season where pretty much everyone under preformed. The expectations were so high people thought the Jets would push the Colorado Avalanche around in the playoffs. The Jets would play like they made the playoffs and play far too laid back.  I think the Jets more or less staying the same is a major vote of confidence from @Kevin Cheledayoff. If the players truly looked in the mirror and found issues their personalities and have forgiven team mates for anything wrong doings that might have been what the boys needed. With the media and some fans lowering their expectations the Jets should be able to relax and just play hockey which should equal a few more wins and goals for the team.

With lowered expectations from the media and fans, more accountability from the coach and what I assume was an honest summer of looking in the mirror for the players the Jets will see glorious highs and crushing lows this season but their feet should be grounded and the boys should take this season on with pride and an ability to win more games than not.