Hockey fans in Winnipeg, the largest city in Canada’s Manitoba province, know what it’s like to lose their beloved franchise. After joining the NHL in 1979, the Winnipeg Jets relocated to Phoenix following the 1995-96 season amid financial troubles that faced the team’s owners.

But that wasn’t before the Winnipeg faithful led a “Save the Jets” fundraising campaign in 1995 with rallies attended by thousands of people, including Jets players and local celebrities. More than $13 million was raised as part of the unsuccessful grassroots funding efforts to save the franchise, which ultimately returned to Winnipeg in 2011 under the ownership of True North Sports & Entertainment (TNSE). Now in its 11th season back in Winnipeg, the Jets have launched a new mobile app that rewards fans for their involvement in the community that fought to keep them almost thirty years ago.

“Despite having some of the coldest winters you’re going to get and other challenges that can come with living in Winnipeg, this is a fiercely proud population,” says Christina Litz, chief brand & commercial officer at TNSE and the Jets. “There’s such a connection with the identity of being a Winnipegger with being a Jets fan. So we built that right into the app. We’re looking for people to engage with the community.”

Fans can register for the Jets 360 loyalty program within the team’s revamped mobile app to earn loyalty points for checking in at Winnipeg landmarks such as the Canadian Museum for Human Rights and the Winnipeg Art Gallery, or for skating at local hockey rinks like the Bell MTS Iceplex. Fans can also earn points through answering Jets trivia questions in the app.

There’s such a connection with the identity of being a Winnipegger with being a Jets fan. So we built that right into the app. We’re looking for people to engage with the community.

The app rewards them with digital pucks that can be redeemed to access exclusive team contests, win signed jerseys, and go to in-person events like the Nov. 15 Jets Hall of Fame game honoring legends Teemu Selanne and Teppo Numminen. Ticket offers to attend games for the Manitoba Moose, the Jets’ AHL affiliate, will also be rewarded through Jets 360.

“We didn’t want to turn this into just a pure transaction of pucks to stuff,” Litz says. “We used video game design theory in the development of the programs so it feels engaging and rewarding. There are special things that happen when you level up within the app in terms of design elements and the variety of different things that you can do to engage.”

Fans can earn loyalty points for checking in at Winnipeg landmarks.

Quebec-based app developer Mirego partnered with the Jets to design the app and surveyed 2,000 Jets season ticket holders as part of that design process. Mirego has previously made apps for the CFL, Montreal Canadians, the TSN broadcast network, and telecom giant Bell.

“A lot of people in Winnipeg make a lot of sacrifices to be season ticket holders, they’ll do groups of let’s say six friends and share the load,” Sébastien Morin, chief strategy officer at Mirego, told SportTechie. “They want to invest because they want the team to stay in Winnipeg, and they are so proud. There are features that we’re working on to make sure that you’ll be able to manage that aspect of I bought a ticket but I’m sharing it with five of my friends.”

The Jets also plan to reward loyalty pucks through in-stadium activations such as the jumbotron prompting fans to make noise during a Jets game, and if a certain noise level is reached those fans will be rewarded through the app’s loyalty program. Team sponsors and local restaurants will also be involved. 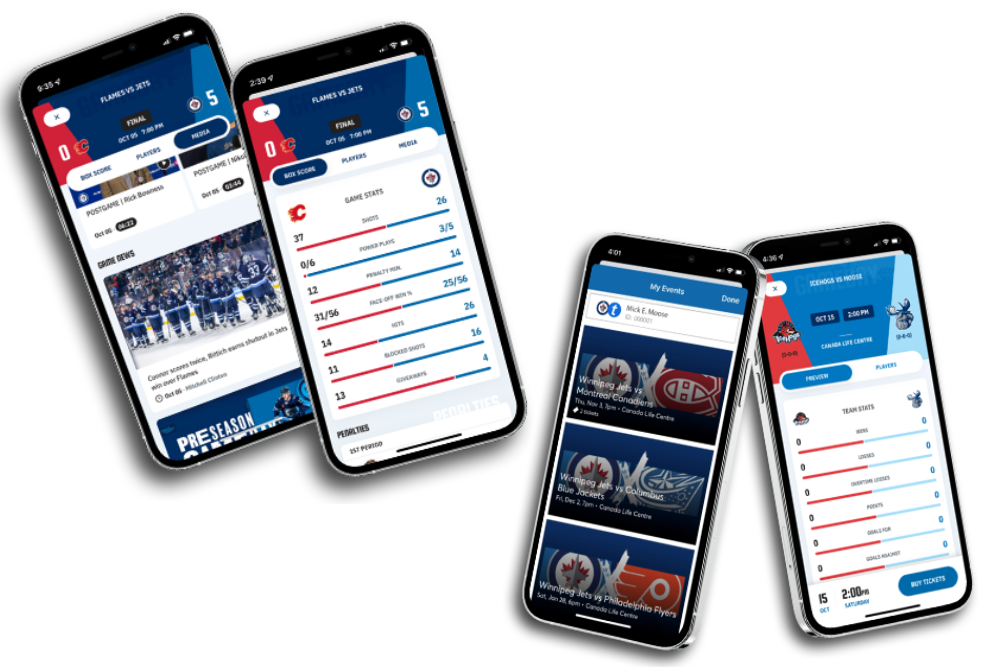 Mirego partnered with the Jets to design the app and surveyed 2,000 Jets season ticket holders as part of that design process.

Morin is a native of Quebec City and grew up rooting for the Quebec Nordiques who like the Jets, joined the NHL in 1979 before relocating to Colorado after the 1995 season. The Nordiques never returned but left a mark on Morin that Mirego carried while developing the Jets app.

“We know the sense of pride and belonging an NHL team creates in a smaller city like Québec or Winnipeg. We also know the hole it creates when it leaves,” Morin wrote on LinkedIn. “Because of this, I personally felt, and still feel, a huge responsibility to make sure we gave Jets fans the mobile application they deserve.”