Brian Bowman was first elected mayor of Winnipeg on a promise to clean up city hall.

Eight years later, he’s about to leave that office knowing Winnipeggers still don’t have the full picture of what transpired at 510 Main St. when the previous administration engaged in real estate transactions and capital procurement projects that have been the subject three external audits, a five-year RCMP investigation and a complex civil lawsuit that has thus far concluded a former chief administrative officer accepted a $327,200 bribe.

“What we’ve seen, I fear, is the tip of the iceberg,” Bowman said late last month, as he conducted his final interview with CBC News before he leaves office.

That exit officially takes place at the strike of noon on Nov. 1, following an Oct. 26 election to choose his successor.

In recent months, Bowman — who announced two years ago he wouldn’t run for re-election — has repeatedly urged Winnipeg’s next mayor, whomever that may be, to continue city hall’s push for a provincial public inquiry into Winnipeg’s real estate and construction scandals and follow through with ongoing civil litigation against dozens of defendants in a lawsuit over the construction of the city’s police headquarters.

“It wasn’t exclusive to the police headquarters,” Bowman said of Winnipeg’s real estate and construction scandals.

“So we continue to call on the provincial government to do the right thing and call a public inquiry. It can happen. It should have happened a long time ago.”

During two terms as Winnipeg’s mayor, it would be fair to credit Bowman for following through on that initial promise to attempt to make city hall more transparent.

He most certainly fulfilled election and mid-term pledges to prioritize reconciliation at city hall, hold property tax hikes to 2.33 per cent a year, invest heavily in road renewals and open a downtown dog park.

Brian Bowman celebrates his first election victory with his wife, Tracy, and their sons Austin and Hayden on Oct. 22, 2014. (John Woods/The Canadian Press)

Bowman did not, however, follow through on some of the most ambitious promises he made during that first mayoral run in 2014.

Winnipeg’s 43rd mayor quickly abandoned a pledge to stop appointing members of council’s executive policy committee and have councillors elect them instead. He gave up on a promise to reopen Portage and Main to pedestrians after a non-binding plebiscite in 2018 deemed that idea unpopular with a majority of Winnipeggers.

He also promised to complete six rapid transit corridors by 2030 but only managed to finish one busway that was already in progress when he was elected.

“They were pretty ambitious,” Bowman said of his initial promises, suggesting some were made by a mayoral candidate who did not expect to win.

“I mean, I started at three per cent in the polls and so part of our strategy was just to present a forward-looking vision and to present a lot of policy ideas,” he said.

“We made over 100 commitments and the vast majority we were able to keep. I took some to council that we weren’t successful on. Others, we were.”

Bowman disputes the idea he failed to fulfil his transit promise, noting the city managed to secure $459 million of funding from all three levels of government for future transit projects.

That money falls short of the projected cost of completing the trio of high-frequency transit routes envisioned in the city’s Transit Master Plan, which come with a price tag of $588 million to $1.1 billion.

“There’s more monies that are going to be needed, for sure,” Bowman said.

The outgoing mayor also regrets that a legal challenge torpedoed his effort to impose growth fees on some new developments at the fringes of the city.

Bowman said a more supportive provincial government would have changed legislation that would have allowed those fees to proceed. Regardless, he said he believes Winnipeg’s next mayor can bring in growth fees.

“What I’m pleased with [about] the decision that we received is there is now a clear road map going forward for how an impact fee can be imposed,” Bowman said. 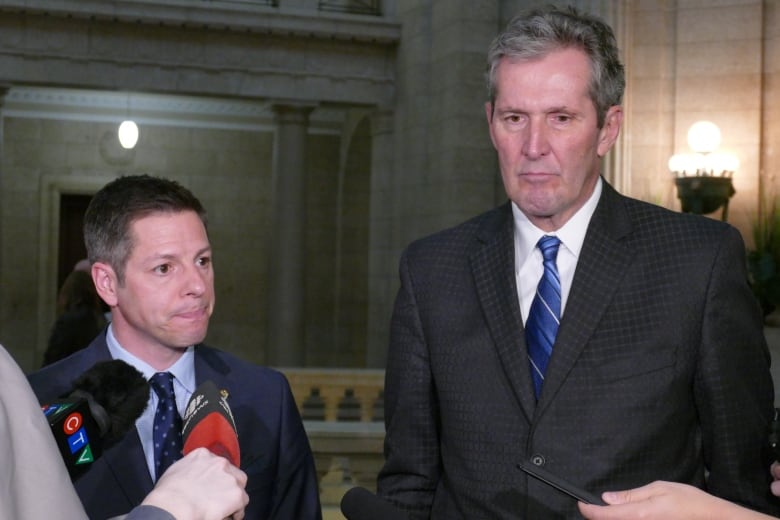 Bowman is seen here at the Manitoba Legislative Building in 2018 with then premier Brian Pallister. The two often did not see eye to eye. (Jeff Stapleton/CBC)

The outgoing mayor also repeated regrets he first issued in December, when he noted Winnipeg has not made more progress finding homes for people living on the streets, along the rivers and inside bus shelters.

“We haven’t been successful at achieving the outcomes as a community to combat homelessness in the way that I think should give anybody any satisfaction,” Bowman said.

Some of his fellow members of council, however, say Bowman ought to be lauded for succeeding in two areas that are important for many Winnipeggers.

North Kildonan Coun. Jeff Browaty, who has served as both a Bowman ally and a critic over the past eight years, said the outgoing mayor did his best to ensure Winnipeg devoted enough money for road repairs.

In 2022, almost a third of Winnipeg’s capital budget — $165 million out of $525 million earmarked for infrastructure and equipment — was devoted to road repairs.

“At the end of the day, he invested in our most important priority,” said Browaty, the longest-serving member of Winnipeg’s current council. “Despite all the pressure to do this and to do that, year over year we continued to invest in roads.”

Fort Rouge-East Fort Garry Coun. Sherri Rollins, a first-term councillor who has always been a staunch Bowman ally, credited the mayor for his focus on reconciliation.

“His best achievement was sustaining the dialogue on reconciliation in Winnipeg,” Rollins said. “That was his No. 1 accomplishment.”

Bowman insisted he did his best with the hand he was dealt over the past eight years.

“I will forever be grateful to Winnipeggers for giving me the opportunity to serve. Who would have known that we’d be living through the worst public health crisis in a century? And you know, we had a less than collaborative premier in office for five of those years,” he said, referring to former premier Brian Pallister. 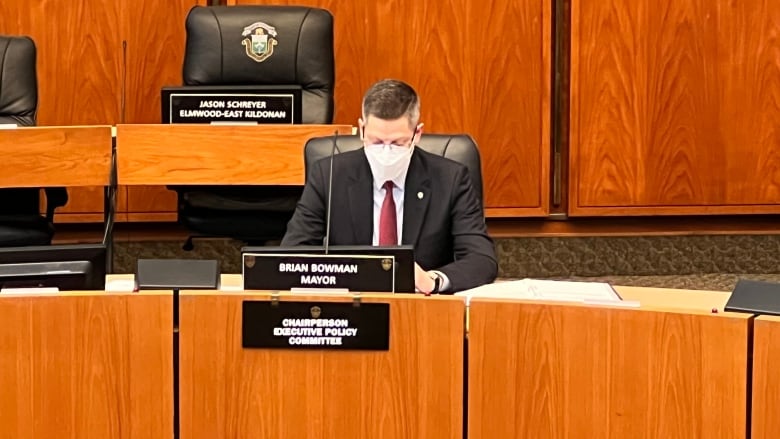 Bowman in the council chamber in February, near the peak of the first Omicron-variant wave of COVID-19. (Travis Golby/CBC)

Winnipeg’s next mayor, he said, would do well to remember they work for everyone in the city and that it won’t be easy to please all of them.

“How could you, with the issues that we deal with?” he asked. “But I think if you come in here with integrity and a work ethic, Winnipeggers will be generous in allowing you to do your job as effectively as you can.”

Bowman would only joke when he was asked what job he plans to take after noon rolls around on Nov. 1.

“I’m gonna complain about the mayor,” he quipped.

“I don’t plan to move to Costa Rica or another destination. I plan to reside in Winnipeg. I hopefully will have more time to clean my house in Charleswood.”

Pressed further, Bowman insisted only he and his wife, Tracy, know what lies ahead for him.

“Professionally, that’ll be a topic for another day.”