It was a beautiful night for trick-or-treaters in Winnipeg this year.

In fact, it was the nicest one the city has seen in years, CBC meteorologist John Sauder said.

The last time the city saw a Halloween close to this warm was in 2011, when the daytime high was 12.3 C — compared to Monday’s forecast high of 14. The normal high is 4, he said.

But that’s not to say there haven’t been some other warm Halloween evenings over the last few years, Sauder said.

Sauder said while people often seem to think there’s always snow on the ground by Halloween, that actually hasn’t been the case.

“Our typical date for the ground to turn white and stay white until March is actually Nov. 15,” Sauder said.

“That’s not to say we haven’t had snowy Halloweens — we certainly have. I think people just remember them … a lot better.”

But for those going door-to-door on Monday evening, the nice weather wasn’t the only thing on their minds.

One group of trick-or-treaters on Sharp Boulevard in west Winnipeg were floored by the display they saw at one of the street’s more elaborate houses, which was decked out with a cemetery and several large, spooky characters throughout the front yard.

“It’s a pretty cool house. I kind of like every feature — all of it’s haunted,” said 10-year-old Julian Quimzon.

“I really like the smoke and stuff. I also really like the headless horseman…. They just brought Halloween to a whole new level,” nine-year-old Sean Terchow Parrott said to passionate agreement from Julian and his other friends. 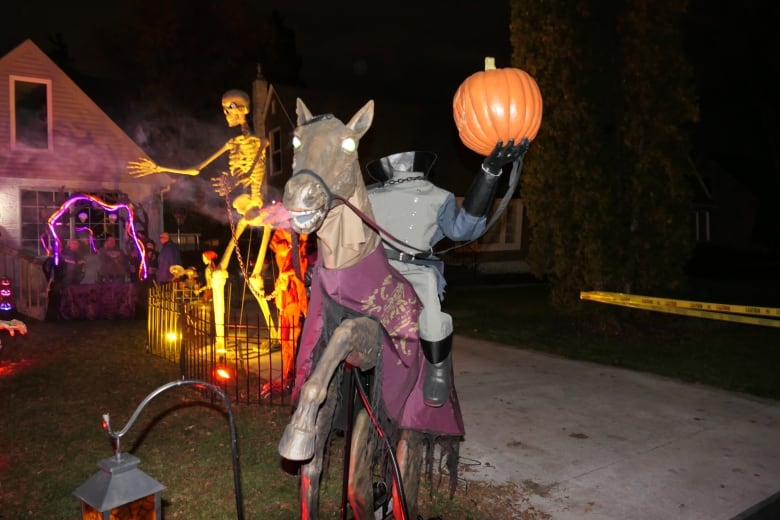 A headless horseman Halloween display at a home on Winnipeg’s Sharp Avenue was a hit with trick-or-treaters. (Randall Mckenzie/CBC)

And when it came time for the group of friends to announce who thought they had the heaviest bag of candy, almost every hand shot up.

Ten-year-old Emery Stewart — dressed as a butcher — was also a big fan of the headless horseman display.

His friend, 10-year-old Theo Gendreau — who went as Michael Myers from the Halloween movies — was even more enthusiastic in his excitement.

“I love it, to be honest. I love how it’s set up. And I like the mixture of all the different monsters. And the cemetery really makes it better,” he said. 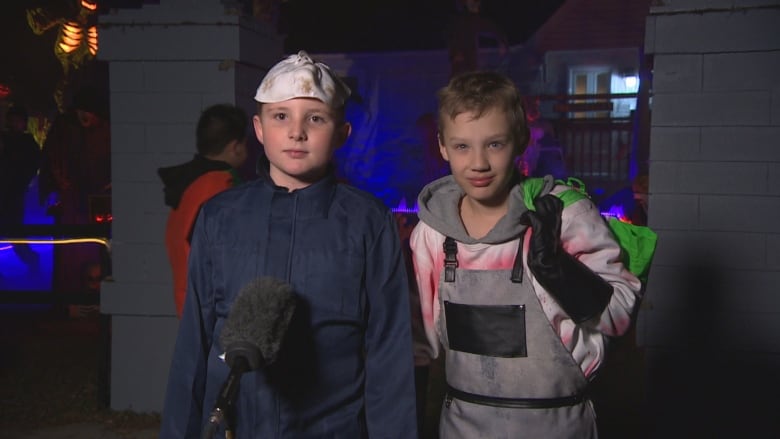 Trick-or-treaters Theo Gendreau, left, and Emery Stewart, right, both 10, were big fans of the Halloween display at one house on Sharp Boulevard. (Randall Mckenzie/CBC)

Nearby, seven-year-old Dorothy Drewes — dressed as a werewolf — was also impressed by the spooky house. And she didn’t need many words to express that.

“It is awesome,” she said, adding the giant skeletons were her favourite part. 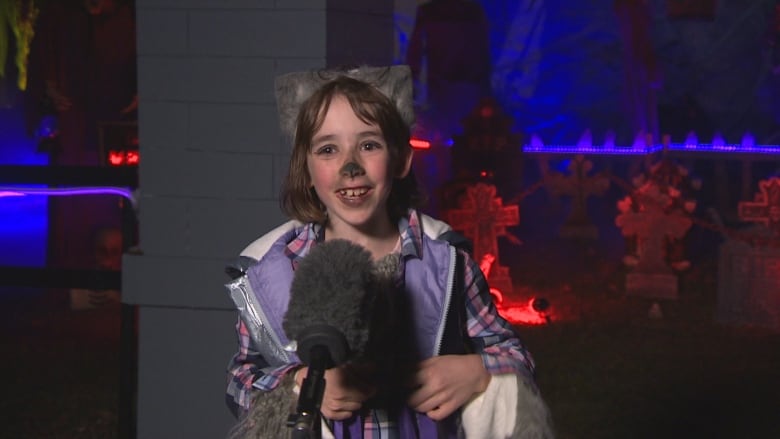 While the spooky display was impressive, what drew eight-year-old Cade Andrew to the street was even simpler: “The candy,” he said. 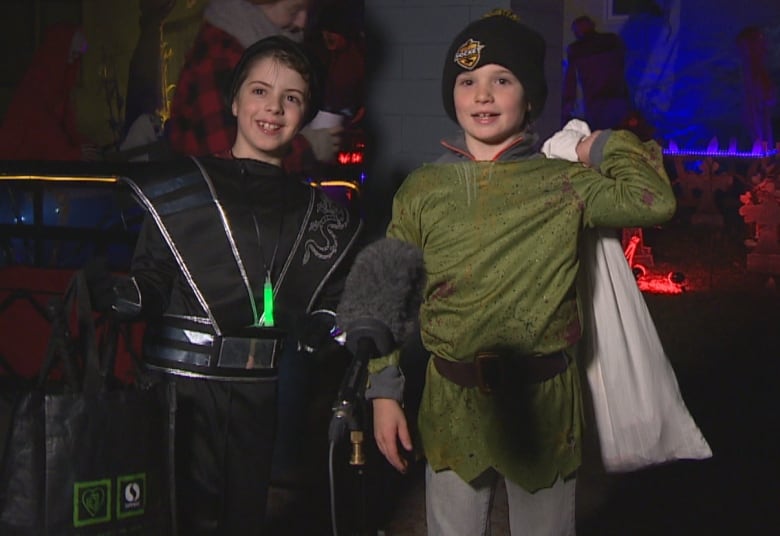 As for the rest of the evening, Sauder said trick-or-treaters shouldn’t have much to scare them into going home — as long as they’re inside before possible showers hit later on.

“It’s going to be a pretty nice night. The winds shouldn’t be too bad,” he said.

“I’m not expecting … any rain or snow until after the kids are done. I’ve got a little chance of a shower in my forecast for later on…. But that’s about it. Should be pretty pleasant.”

WYMAN: Jets glad to select up factors, however removed from thrilled with the best way they’re taking part in