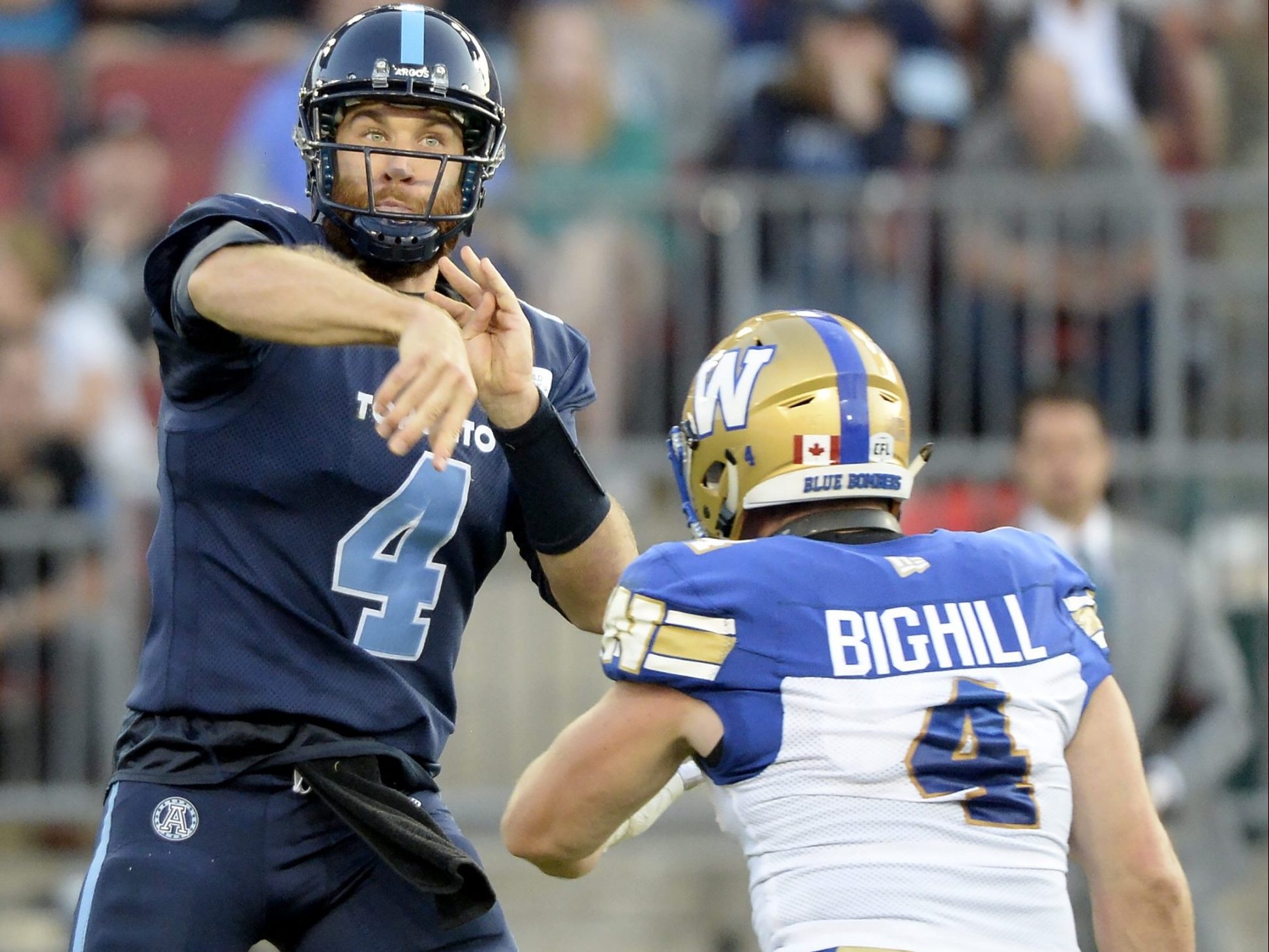 1. RUN, ANDREW, RUN: The Argos need to control the line of scrimmage and there’s no better way than to establish a ground game as Andrew Harris plays his former team for the first time in Double Blue. He hasn’t played against his hometown team since Oct. 10, 2015 when he suited up for the B.C. Lions. Harris needs 225 rushing yards to reach career 10,000, he feat he won’t reach Monday.

2. RUN OF THE MILL: Brady Oliveira enters the night with a 3.0 rushing average for the Bombers while Johnny Augustine is averaging 3.7 per attempt. Winnipeg will dress American Greg McCrae for the first time; the 5-foot-10 McCrae averaged 6.5 yards at Central Florida. He spent time with the Argos in 2021.

3. WRIGHT ON: Isaiah Wright is expected to handle the return duties for the Argos following a hamstring injury suffered by Javon Leake during Saturday’s practice that landed Leake on the six-game injured list. Field position looms large and the Argos will need to make a play on special teams against a Winnipeg unit that is disciplined on cover teams.

4. ‘BIG’ NIGHT: The Argos will need to account for Adam Bighill if they have any hope of establishing a ground game; Harris is well aware of Bighill’s tendencies, but Bighill is also keenly aware of what makes Harris tick. From sideline to sideline there’s no better LB than Bighill, who is equally adept when making plays down hill.

5. WOE IS THE O: Toronto’s offence hasn’t been good in two games and it will need to stay on the field against a Bombers defence that doesn’t allow opponents to sustain drives; the Argos have been pretty bland, but resorting to some trick plays might help kick-start an offence that needs a spark.

Good guy Kolankowski attended York and earned a Grey Cup ring with the Argos in 2017 as a rookie. He’ll line up at centre and will need to be at his very best in anchoring the interior of Winnipeg’s O-line. Oakman is a beast and he’ll need to be kept in check, but Kolankowski can’t do it alone so the Bombers will likely double team the Argos lineman at times.

Last of four games for Winnipeg against Eastern foes as the start of the season will see the Bombers play against Western opponents for the next four games … In 74 games with Winnipeg, Harris recorded 5,402 rushing yards, scored 35 total touchdowns and accumulated 7,986 yards from scrimmage; in last week’s loss in B.C., he became the fifth player in league history to record 15,000-plus scrimmage yards and trails Winnipeg great Milt Stegall (15,209) by 169 yards for fourth all-time … To illustrate Big Blue’s dominance on D, consider these numbers: Winnipeg has allowed fewer than 20 points in 13 of 17 games since the start of 2021 and are 12-1 during that stretch; Winnipeg has won the turnover battle in 14 of 17 games since the start of 2021 to post a 13-1 record during that window; the team has only allowed 12 points in the second half, no touchdowns yielded and only six points allowed in the fourth quarter on two field goals this season … Both teams will dress an American backup at running back with McCrae making his CFL debut with Big Blue and A.J. Ouellette making his season debut with the Double Blue

It’s a winnable game for the Argos, who seldom lose at home, but so much will depend on their offence and ability to finish drives with TDs against a stout Winnipeg defence. This game can go either way given Winnipeg’s lack of offensive explosiveness and the injury absence to Nic Demski. A big key is how well the Argos can keep WR Rasheed Bailey from making plays.