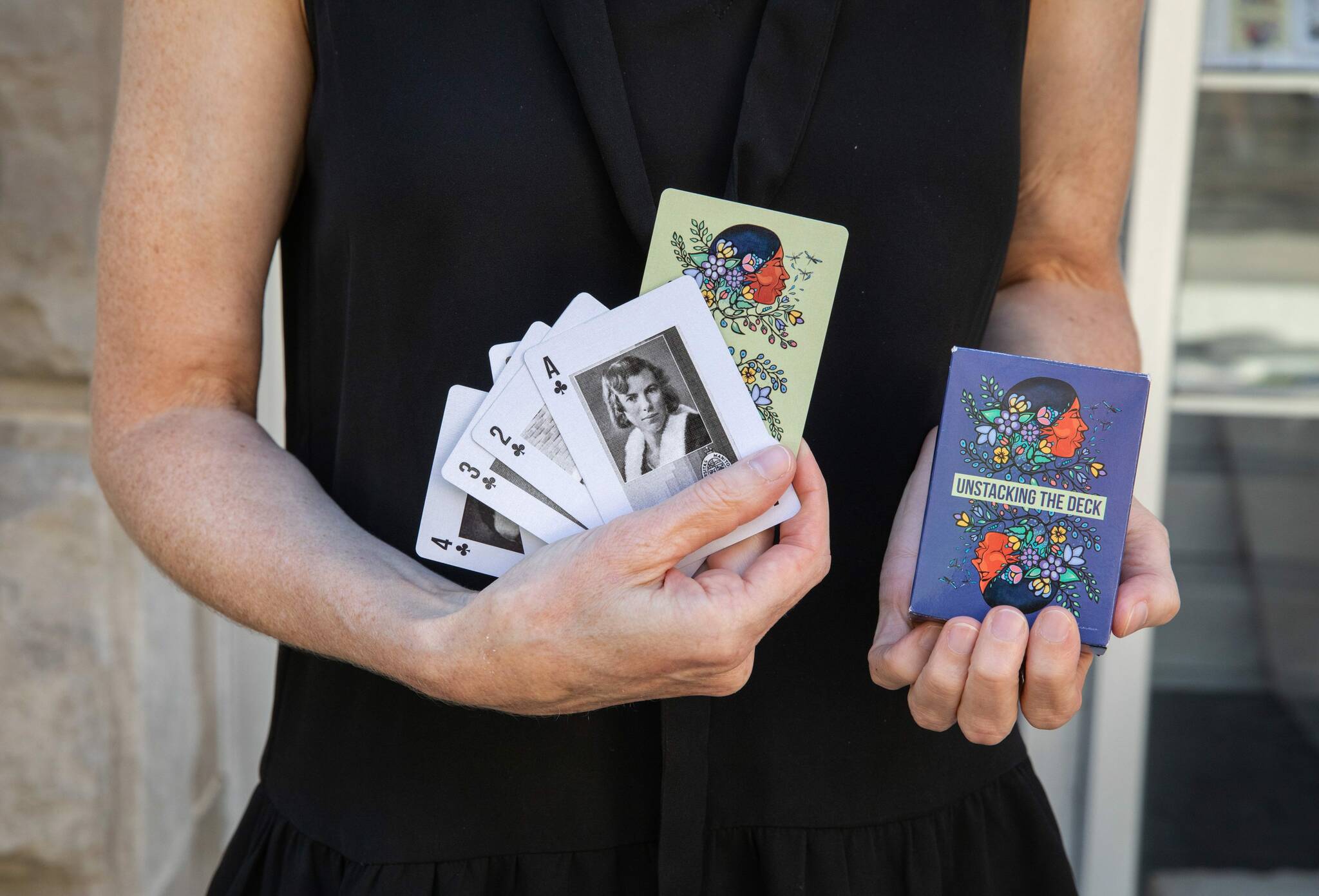 It looks like a normal deck of playing cards — 52 cards, plus two jokers — but that’s where the similarities end.

These cards, and their subject matter, are a rarity.

Unstacking the Deck: A Game of Change was made to honour early women in architecture and to raise awareness of broader issues of diversity in the design professions in a fun and accessible way, says Lisa Landrum, associate professor and associate dean research in the faculty of architecture at the University of Manitoba, who conceived, initiated and led the project.

An exhibition featuring the deck and highlighting the research process opens at the Winnipeg Architecture Foundation, 266 McDermot Ave., on Friday.

The deck includes all 44 women who graduated from the U of M’s bachelor of architecture (B.Arch.) program in its 60-year history. There were 900 male graduates from the program during the same time span.

The cards are divided by suit, with spades and clubs featuring early graduates from the university’s B. Arch., M. Arch. and community planning programs.

Diamonds focus on women in interior decoration/design, while hearts honour those who studied elsewhere but who made an impact in Manitoba.

The set begins with the first female graduate, Ethelyn Wallace in 1932, and ends with the women who launched their careers in the early 1970s. 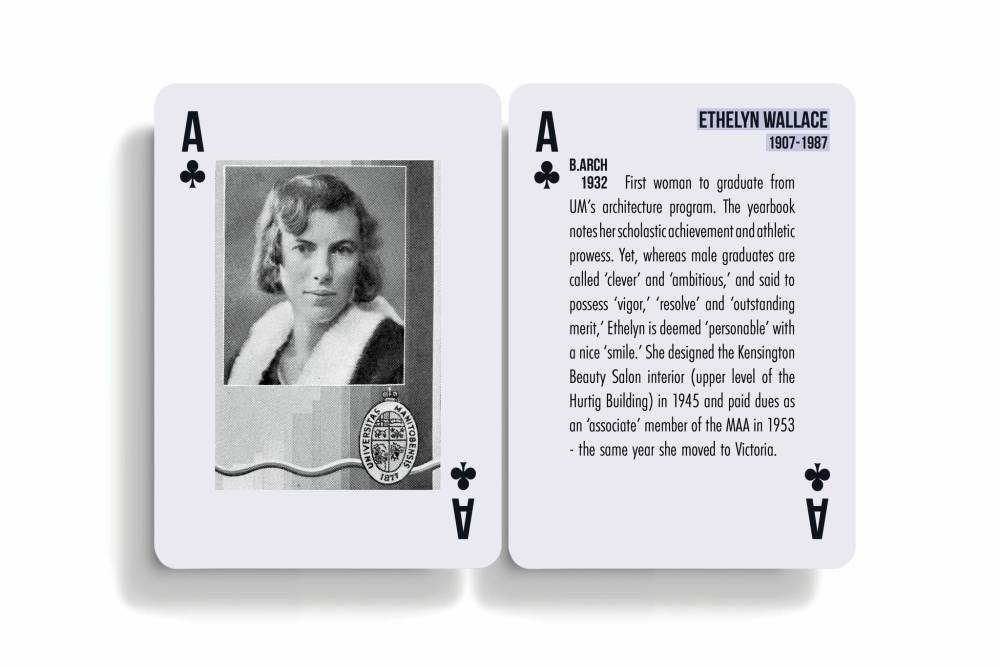 The ace of clubs features Ethelyn Wallace, the first woman to graduate from the U of M with a bachelor of architecture in 1932.

Landrum worked on the project intensely for six months, although her research on this topic started 11 years ago.

“I first started researching the topic in 2011, when a student raised a concern about the lack of women architects included in the teaching of architecture. The history of gender bias in architecture is as old as architecture, and research on the topic, which started to emerge in 1970s, has grown significantly in recent years.

“I worked on the project as a side project over the summer and winter holiday of 2021, and the winter break of 2022. The multi-year research on Manitoba Women in Design by Winnipeg art historian Marieke Gruwel, with whom I collaborated on the research content, gave the project content a jump start,” she says.

She was aided by architecture students Alixa Lacerna, Raik Laird and Alina Bilonozhko. 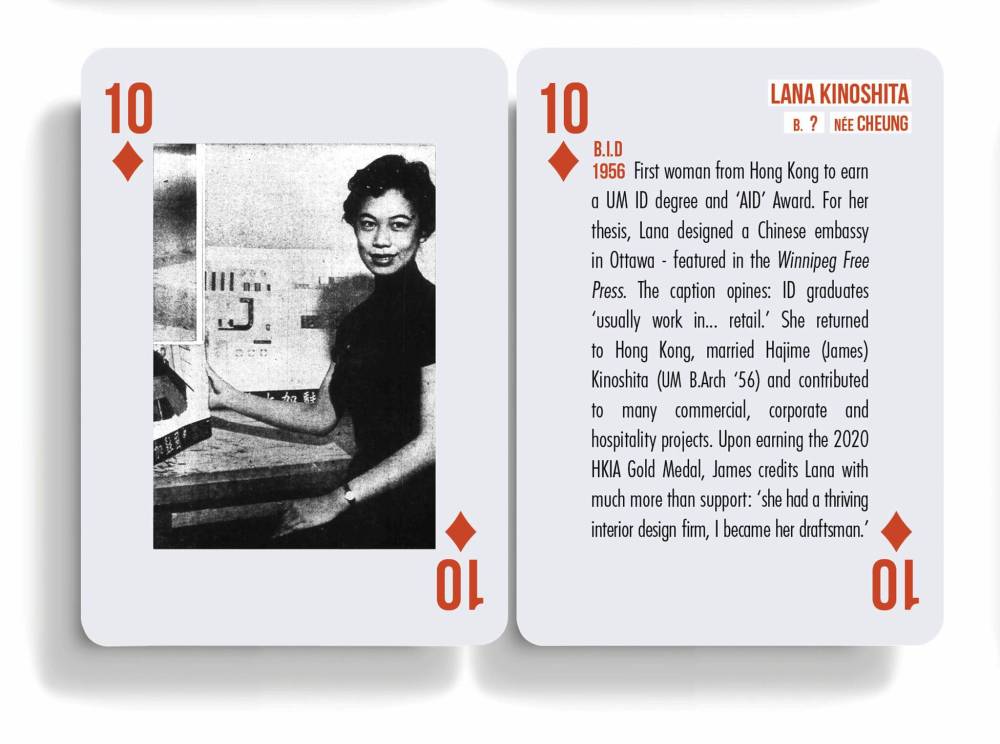 Diamonds in the deck feature women who graduated from the interior design program, including Hong Kong-born Lana Kinoshita.

“The purpose of the cards is to celebrate all early women who studied architecture in Manitoba and made it possible — generations later — for women in the field to thrive. The work of many of the women in the deck is not known,” Landrum continues.

Some of the women featured gave up their careers to raise a family, Landrum says.

“Limited records exist, and an enormous amount of research still needs to be done. Unstacking the Deck also shows how so-called unconventional roles can have significant social value and positively impact the built environments.

“There are also designers who have led or contributed to notable buildings and settings many Winnipeggers love,” she says. 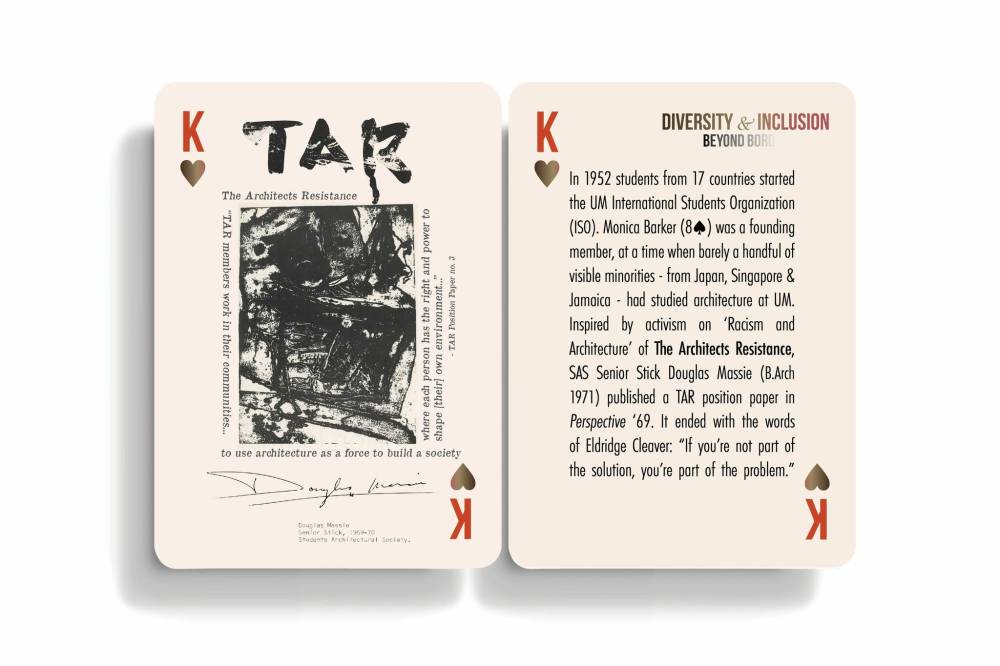 The king of hearts is designated as Beyond Borders, honouring international students and racialized groups.

They include: the Millennium Library and ArtLab, designed by Patricia Patkau and team, The Forks Historic Port and Market Plaza (Cynthia Cohlmeyer) and the interiors of some of Winnipeg’s most important civic and cultural institutions, including Margaret Stinson’s work in the Winnipeg Civic Centre, the Manitoba Museum and the Centennial Concert Hall; the old Winnipeg International Airport (Eleanor Brown, Ming Tek Chan, Marjorie Pritchard and Elizabeth Pilcher); and University of Winnipeg’s Centennial Hall (Ursula Ferguson), as well as several private homes.

For each of these cards a founding student group from the 1950s or 1970s is linked to a current, recently founded group in the faculty of architecture, including the Indigenous Design and Planning Students Association (IDPSA) and SAS Beyond Borders. 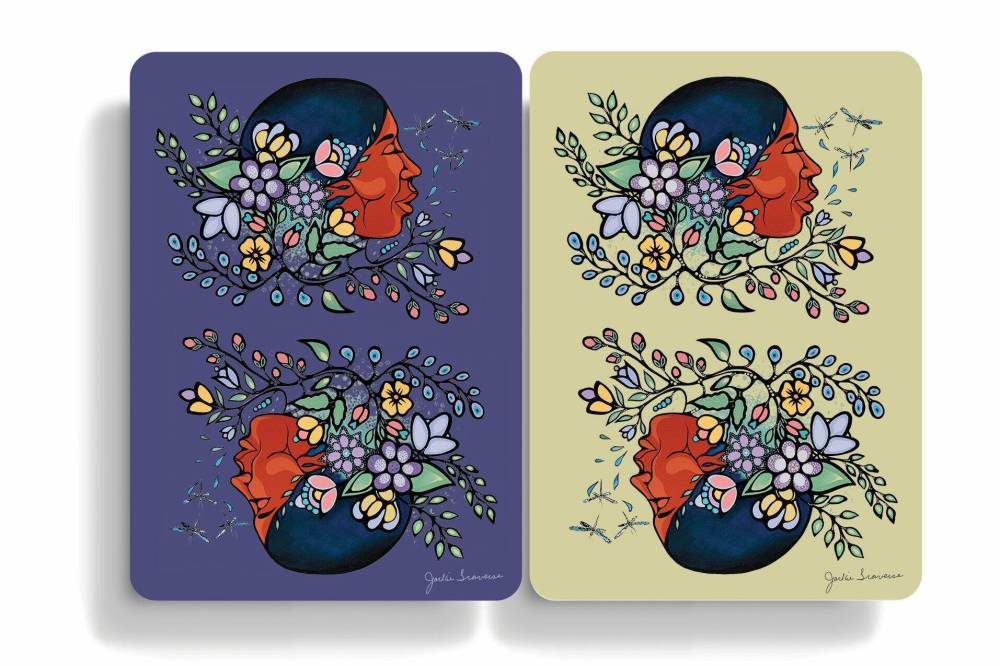 The back of the cards features an illustration by Jackie Traverse called Breath of Life.

“The cover art on the cards — Breath of Life by Ojibwe artist Jackie Traverse — further acknowledges the generations of women and Indigenous peoples who built meaningful environments long before the invention of formalized education and registration processes for architects,” Landrum says.

The cards, which come in double decks — one featuring pictures of women, the other mini-biographies on the matching card — are on sale for $25 and available to buy online from the WAF website or at the exhibition, which opens Friday from 7 to 9 p.m. The exhibition runs until Oct. 14. Masks are mandatory.