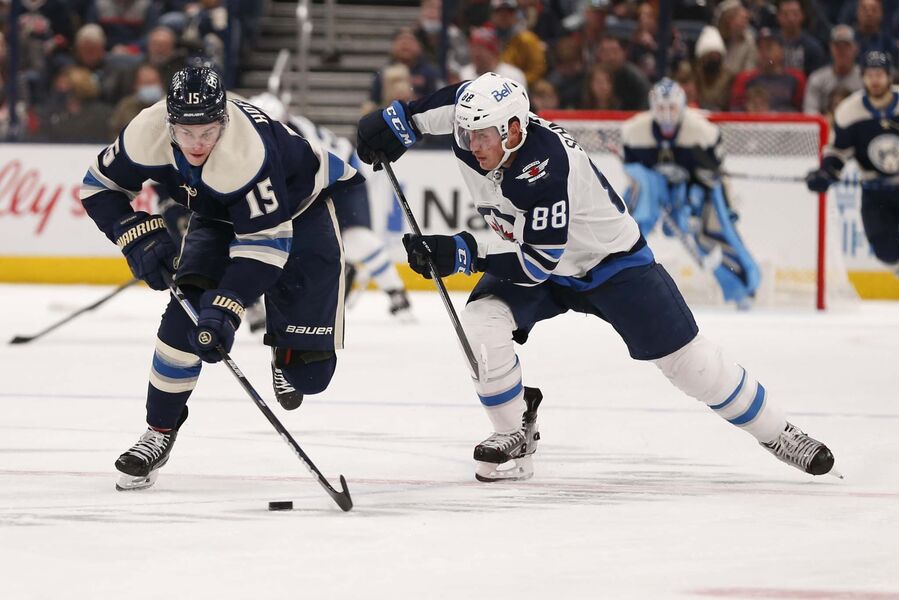 ST. PAUL — Nate Schmidt and several of his Winnipeg Jets teammates might want to consider sending the NHL schedule-maker a fruit basket or box of bonbons as a token of their appreciation. Because getting to be home for the holidays — in this case, U.S. Thanksgiving — was a rare sweet treat in the middle of a busy hockey season.

“First time in 10 years. Since I was in junior. It feels good, nice to see some family,” Schmidt said following Thursday’s brisk on-ice workout at Xcel Energy Center. Although the majority of the team was getting together for a big turkey dinner at their hotel, Schmidt, a product of St. Cloud, was ducking out to break bread with plenty of local loved ones.

“My aunt makes homemade pumpkin pie, and I’m going to indulge in that. I’m excited,” he said, Schmidt conceded he’d have to manage his calorie intake, with a matinee game on Friday afternoon and no morning skate to work it off.

Blake Wheeler, Neal Pionk and Dominic Toninato are also from the State of Hockey.

“It’s a big holiday for us. Obviously, having played as long as I have, I’ve spent one Thanksgiving with my kids,” said Wheeler. “It’s kind of bittersweet. It’s nice to see your family — sister and parents — but I’d love to be able to spend this holiday with my (immediate) family. One day.”

Speaking of Schmidt, there’s no question he is Mr. Positive. And so the 30-year-old was asked if a four-game winless skid by his squad has him trying to counter any gloom-and-doom that might be seeping in to the dressing room.

Turns out no motivational speeches have been needed.

Schmidt believes the second meeting of the year against Minnesota “couldn’t come at a better time for us.”

“Last time we played these guys it was a war. And I don’t foresee it being anything but that (Friday) afternoon,” he said. “It’s the kind of game that gets you engaged physically, mentally and I believe that our group is going to come tomorrow knowing it’s a big Central Division game and this is a team that you’re going to be jockeying with all year. Last time we were here, close but not enough.”

No doubt the league disciplinarians will want to ensure things remain civil between the heated rivals and don’t get out hand the way a couple of incidents did on Wednesday night in Columbus.

Blue Jackets forward Max Domi appeared to lose his mind in the third period, sparking a melee by shooting a puck into Winnipeg’s net after the whistle, then throwing several punches at Evgeny Svechnikov who was being restrained by the linesman. Domi received a double-minor for roughing at the time, and was slapped with a maximum fine of $5,000 for unsportsmanlike conduct Thursday.

Jets defenceman Josh Morrissey is a little lighter in the wallet as well, getting hit with the same dock in pay for a wicked slash against Columbus forward Alexandre Texier in the dying moments of the 3-0 loss.

“Expensive night,” cracked Jets coach Paul Maurice. “Just a little bit of silliness. I didn’t find it to be that kind of game. (Friday) there will be a whole lot more action.”

The Jets could get a boost with the return of veteran Paul Stastny to the lineup. He has missed the last eight games with a bone bruise in his foot, but was a full participant at Thursday’s skate. After facing off against Minnesota on Friday afternoon, Winnipeg will finish the road trip on Saturday night in Calgary.

“We’ll wait to see how he feels (Friday),” said Maurice. “He’s playing in one of these two games. We’ll see if he feels strong. If he does, then he’ll go. If not, we’ll wait one more. He had a good hard day (Wednesday) and came to the rink feeling pretty good today.”

Stastny, 35, has four goals and four assists in 11 games this season.

As for the goaltending plan, Maurice said he’d consider playing Connor Hellebuyck in both games. Normally, the work would be split, but the Jets will fly to Calgary on Friday evening, then have a full 24 hours until puck drop against the Flames. That makes it a bit more of a non-traditional back-to-back.