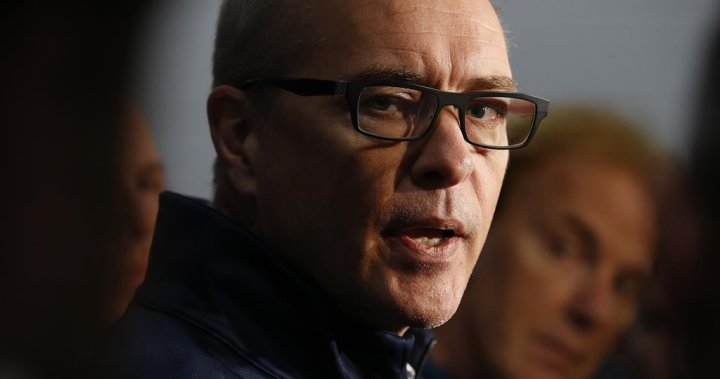 Paul Maurice and the Florida Panthers are in the process of finalizing a deal to make him the club’s new coach, a person with knowledge of the situation told The Associated Press on Wednesday.

The Panthers are hopeful of making the hiring official later this week, said the person, who spoke on condition of anonymity because the status of the negotiations was not publicly announced by either side and no contract had yet been signed.

Paul Maurice resigns as head coach of the Winnipeg Jets

Maurice would replace Panthers interim coach Andrew Brunette, who could remain with the organization if he chooses to do so.

Brunette took over early last season following the resignation of Joel Quenneville, who had to step down after the revelation of how the Chicago Blackhawks mishandled abuse allegations brought by a player during the 2010 Stanley Cup playoffs. Quenneville coached Chicago at that time.

TSN first reported that the Panthers and Maurice were finalizing an agreement.

The Panthers would become the fourth franchise to be coached by Maurice. He started in Hartford in 1995, two seasons before that franchise relocated to Carolina.

He coached Toronto for two seasons before returning to Carolina, then spent nearly nine years as coach in Winnipeg before stepping down there in December.

“I’ve pushed as long and as hard as I can here. I love these guys. They need a new voice, and I know that,” Maurice said when he left Winnipeg.

Now six months removed from that decision, Maurice is also getting a new start with a team that believes it is a Stanley Cup contender.

Florida won the Presidents’ Trophy this season and reached the second round of the playoffs, winning a postseason series for the first time since 1996. Brunette was a coach of the year finalist in his first head-coaching stint at the NHL level.

Hextall on Hockey: Is this the end of the line for Paul Maurice and the Jets?

That wasn’t enough to get him the job long-term. Instead, the Panthers are turning to Maurice, who is fourth on the NHL’s all-time games coached list with 1,684, and seventh on the all-time wins list with 775, but who has never led a team to the Stanley Cup.

Florida, over the last three combined seasons, ranks second in the NHL in wins (130) and standings-points-per-game (1.35) — behind only Colorado on both of those lists. The Avalanche have 137 wins and average 1.41 standings points per game over that span.