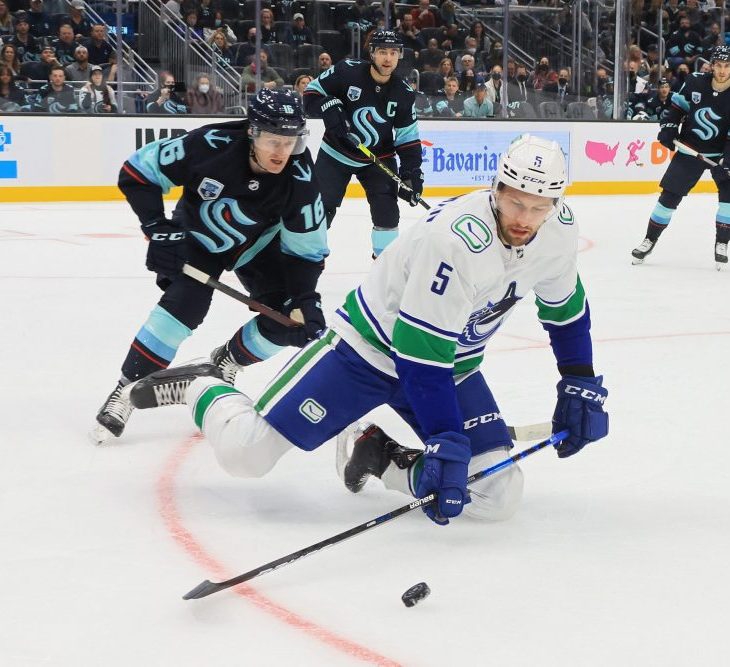 Coming into Friday’s game, Tucker Poolman and the Canucks were ranked seventh in the eight-team Pacific Division with a 5-10-2 record, already eight points behind when it comes to the playoff chase and sporting an ugly four-game losing streak. USA TODAY

What’s not to like? Other than the cloud-covered wet days, it’s far from the frozen tundra of Winnipeg, or his hometown of East Grand Forks, Minn. He also didn’t walk into the Canucks dressing room at Rogers Arena without a clue of who his new teammates were.

He and Tyler Myers were once on the same team in Winnipeg, and Brock Boeser was his teammate when the two won the Frozen Four in 2016, taking the NCAA Division I men’s hockey title with the University of North Dakota.

Heck, even the way that head coach Travis Green is deploying Poolman isn’t dissimilar to how Paul Maurice shuffled the 28-year-old up and down his defensive pairs.

“Guys are great, good locker room — that part has been good,” Poolman said Friday after Vancouver’s pre-game skate prior to meeting the Jets for the first time since signing as a free agent in Vancouver this past offseason. “Me and my wife moving out here, getting to know a new city. That’s been good for the two of us.”

On the ice is a bit of a different story.

Coming into Friday’s game, the Canucks were ranked seventh in the eight-team Pacific Division with a 5-10-2 record, already eight points behind when it comes to the playoff chase and sporting an ugly five-game losing streak.

“It’s not anywhere near good enough to help us win games,” Poolman said. “That, just alone, if we could perform better in that, there’s some big goals in some tight games when we needed to step up on the PK and we haven’t been able to do that.

Poolman’s game 5-on-5 hasn’t been poor, but like his team, his PK performance hasn’t been up to snuff.

“We’re struggling right now, obviously, but I’ve felt alright,” Poolman said. “Just trying to get a little bit better at things, trying to find a new path for me, even though it’s a different team. Trying to stick to the same script.”

Poolman played a good chunk to start the season with Quinn Hughes on the top pair, seeing at least 20 minutes a night — not unlike his time on the top pair with Josh Morrissey for much of last season. When St. Malo’s Travis Hamonic returned to the lineup, Poolman was bumped down to the third pair and his minutes decreased as a result.

“Different scenarios and different games” is how Green put after Vancouver’s pre-game skate.

Now Green has him with Oliver Ekman-Larsson, one of those summer additions.

Poolman wasn’t re-signed by the Jets after the truncated 2020-21 season. Poolman deferred to his agent on what exactly happened, but a suitable deal between the Jets and himself never came to fruition.

The writing was on the wall.

Poolman signed a lucrative four-year, $10 million deal with the Canucks on July 28. A day earlier, the Jets made a trade with Vancouver to acquire defenceman Nate Schmidt. A day prior to that, general manager Kevin Cheveldayoff swung another deal that brought another defenceman, Brenden Dillon, into the fold.

“It was pretty obvious when it got to the end,” said Poolman, who battled COVID-19 last season and said Friday it took him a few months — most of the season — to finally feel himself again.

Poolman harbours no hard feelings toward the team that drafted him in the fifth round, 127th overall in the 2013 NHL Draft and developed him into a defenceman that Vancouver felt was worth both the money and the term.

“I enjoyed it there, close to home, great guys, great organization — I have nothing bad to say about anybody there,” he said.

“You get drafted there, you do all the development camps,” Poolman said. “It was definitely different leaving, but it’s been fun in aspects. Just something new, a fresh start in a way.

Poolman scored his first as a Canuck on Wednesday while also adding an assist. He has three points on the year.

General manager Jim Benning bemoaned the lack of success his summer arrivals have been having during a press conference on Thursday.

“Part of our problem is a lot of our good players aren’t playing to their potential,” Benning told reporters on Thursday.

Poolman said it’s taken a bit of time to get Green’s system down, with a few tweaks to what he knew from his tenure in Winnipeg.

“Still gelling, still trying to figure everything out,” Poolman said. “I’m a pretty straightforward player. Just trying to play hard every game. It’s about gaps, stick, making the simple, right play, getting into the rush when it’s there, getting shots through. That’s kind of what I’ve tried to stick to.”

Are Climbing Guelph Actual Property Costs Pushing Locals Out of the Market?