The holiday season is pretty much here, meaning in addition to such respected traditions as traumatizing one’s toddler with a visit to a mall Santa or Googling recipes for figgy pudding, it’s also time to welcome back Cream of the Crap’s A Very Crappy Christmas, an annual, ticketed affair dedicated to the “worst and weirdest home-video atrocities on VHS.”

Excuse me, Blitzen? Cream of the what?

Let us put it this way: despite being called the “most despicable holiday movie of them all,” not to mention, the “worst Christmas movie of all time,” when it comes to cinematic putridness, the 2003 rom-com Love Actually can’t hold an eggnog-scented candle to that which attendees are in store for Saturday night, at the Good Will Social Club, 625 Portage Ave.

Seated in a downtown food court, Jaimz Asmundson, who co-founded Cream of the Crap in December 2018 with pal David Knipe, won’t reveal the name of the feature viewers will be treated (mistreated?) to, this time around. As always, that’s classified information until the lights go down.

What the 41-year-old musician, who fronts the band Ghost Twin with his wife Karen, will allow is that the tape getting loaded into the video-cassette recorder is guaranteed to have a “perfect ratio of authenticity and ineptitude,” his definition for what separates a crappy motion picture from a downright, awful one.

(Yes, Virginia: in order for a film to be considered for Cream of the Crap’s yuletide spectacular, it had to have been released on VHS, a multi-flawed format that went the way of the dinosaur in 2006, but which Asmundson actively collects to this day.)

“If you’ve attended one of our events in the past, then you already know how much joy watching a sh—-y movie in a group setting can bring,” he responds, when asked the million-dollar question: who in their right mind wants to spend their hard-earned moolah, never mind the better part of a Saturday evening, taking in something many have deemed to be the rottenest of rotten tomatoes?

“I mean, what other (film) screenings do you leave with a smile on your face, with the feeling that you’ve just bonded with a roomful of total strangers?”

“If you’ve attended one of our events in the past, then you already know how much joy watching a sh—-y movie in a group setting can bring.”–Jaimz Asmundson

Cream of the Crap got its start four years ago, that’s true, but the seed for the interactive get-together was planted in 1987, when Asmundson began paying regular visits to a Sherbrook Street corner store, a block from where he lived, to rent whatever VHS tape caught his six-year-old eye.

“Let’s just say there wasn’t much of a parental filter back then. My mom or dad would give me a couple bucks and go, ‘here, choose whatever you want,’” he says, pausing to welcome Amanda Kindzierski, an independent filmmaker who often serves as one of Cream of the Crap’s guest panellists.

Long a fan of the horror genre, Asmundson guesses he was 10 years old when he started collecting VHS tapes in earnest, largely by purchasing titles for a few pennies each, through Columbia House’s mail-order club. He chuckles, mentioning his parents are probably still upset with him, from the multiple followup bills they received, informing them they now owed such-and-such an amount, to fulfil their family’s end of the contract. 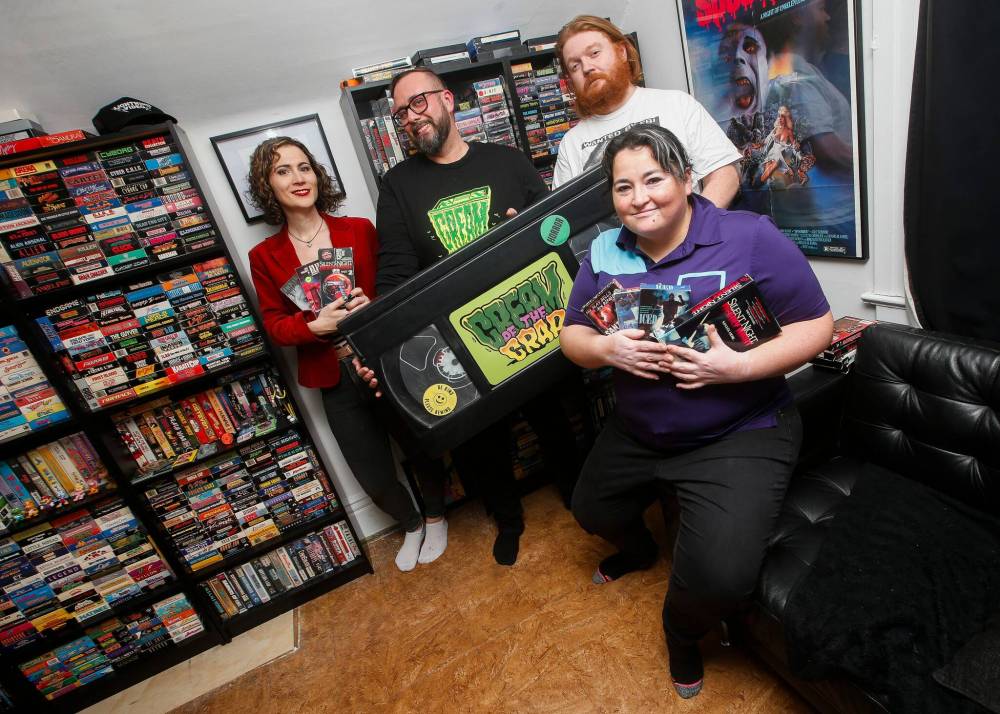 Fast forward to the fall of 2017: Asmundson, by then a Winnipeg Film Group member who was also serving as programming director for the Dave Barber Cinematheque, a position he holds to his day, was discussing what the group should do with an extensive selection of old, 16-mm Hollywood movies that had been donated by acclaimed director Guy Maddin.

After tossing around a few suggestions, he and his fellow members came up with what they termed Secret Cinema, which would involve pre-selecting a particular celluloid feature, and showing it to a paying audience that wouldn’t have a clue what they were in for.

“It turned out to be a fantastic idea. I remember seeing The Third Man for the very first time, at Secret Cinema,” Kindzierski says, referring to the 1949 film noir, voted the greatest British movie of all time, by the British Film Institute.

“For me, I enjoyed putting on an event where people were trusting you for the evening… were trusting your taste,” Asmundson interjects. “Cream of the Crap simply builds on that, in a humorous manner. While Secret Cinema remains very much highbrow — we bring in a curator who speaks eloquently about the history of the film and its impact on cinema — Cream of the Crap is about as lowbrow as you can get.”

“While Secret Cinema remains very much highbrow — we bring in a curator who speaks eloquently about the history of the film and its impact on cinema — Cream of the Crap is about as lowbrow as you can get.”–Jaimz Asmundson

“He’s not kidding,” Kindzierski states. “You don’t know how crappy crappy can be, till you’ve seen what they curate. I don’t even know where they find some of these movies.”

If you’re new to Cream of the Crap, which is generally tied to special occasions such as Valentine’s Day and Halloween, here’s a bit of what to expect.

The fun gets underway at 5 p.m., when a half-dozen vendors hold a swap meet of sorts, by offering VHS tapes and players for sale and/or trade. Most of those poking through the bins are in their late teens or early 20s, Kindzierski says, calling their renewed interest in older media a “hipster thing.” 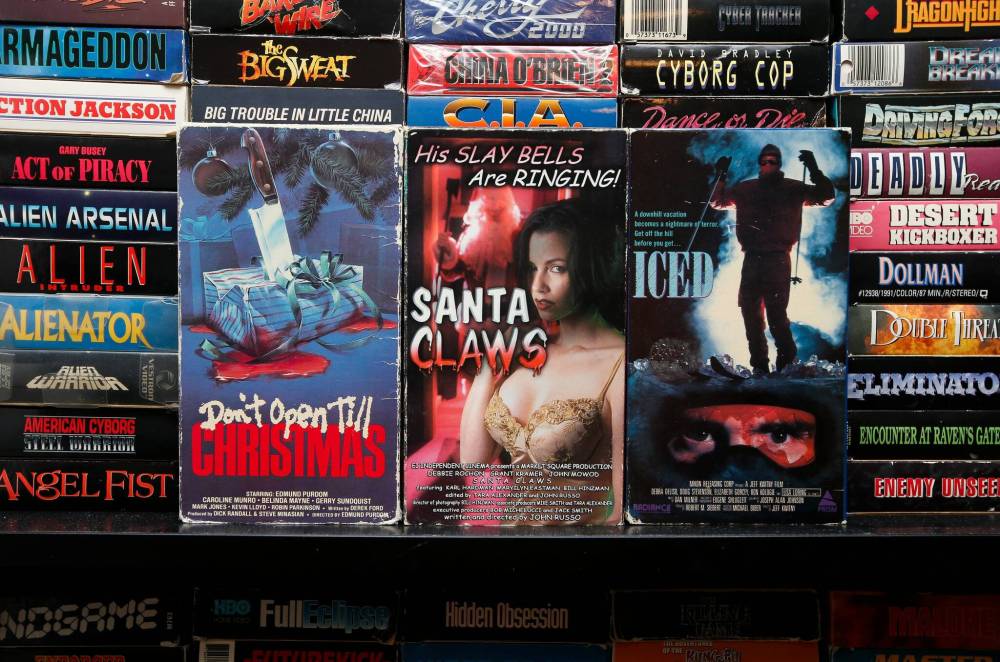 To be considered for A Very Crappy Christmas, a movie has to be among the worst and weirdest home-video atrocities on VHS.

Show time is 6 p.m. sharp. There’s no need to put your phone on silent mode. For the next two hours, audience members, seated at tables, are encouraged to hoot and holler along with the action taking place on screen. That Cream of the Crap has now shifted over to a fully licensed facility from its original home at Cinematheque should only add to the frivolity, Asmundson says with a wink.

“There are times during a movie when we might turn the volume off completely, and improvise the dialogue,” continues Kindzierski, whose fellow panellists this time around will be Asmundson, film buff James Korba and comedian Abby Falvo (Knipe, the event’s co-founder, now lives in Toronto). Even better, if there’s a tune involved, they might pause things altogether, and lead the crowd through a sing-along. 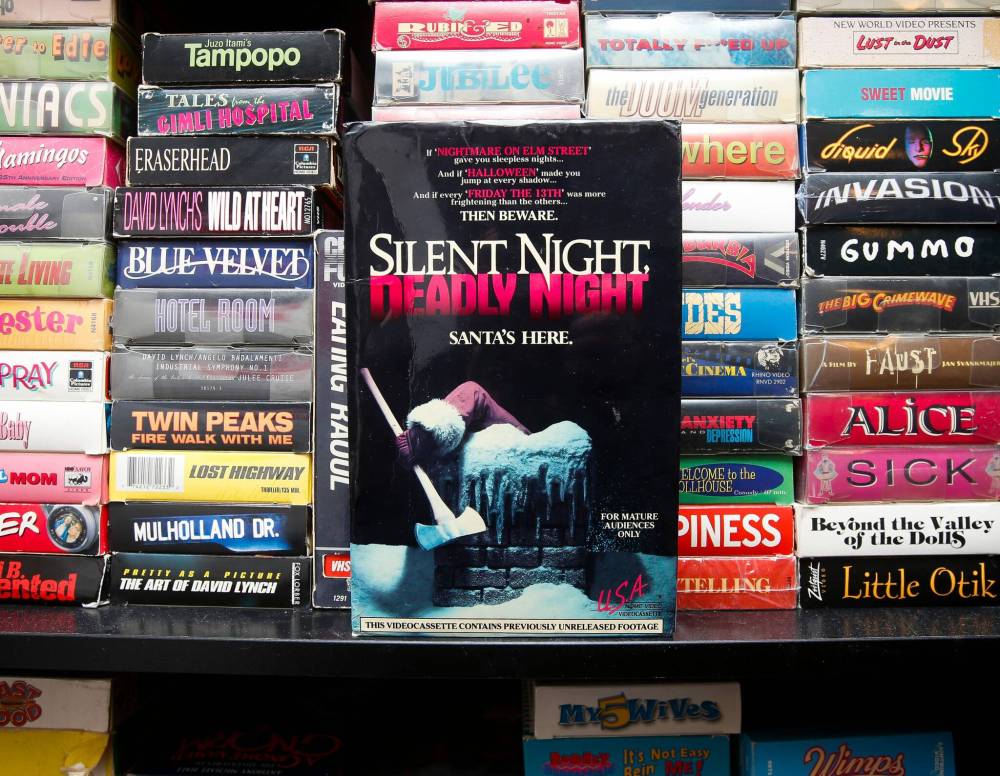 These flicks are ‘about as lowbrow as you can get.’

Also, as disjointed as it may be, one should try to pay attention to what stands for a plot. After the end credits have rolled by, the organizers will award prizes to those able to successfully answer trivia questions based on what they’ve just witnessed.

“Then, as soon as one event is over, I start thinking about the next one, by watching and re-watching crap-worthy movies from my personal collection,” Asmundson says. “It’s always a bit of a fine line finding something that isn’t good by normal standards, but is still fun to watch.”

“It’s always a bit of a fine line finding something that isn’t good by normal standards, but is still fun to watch.”–Jaimz Asmundson

(Get this: during a virtual Cream of the Crap held at the height of the pandemic, Asmundson welcomed as a special guest, John Stewart, the director of Action U.S.A., a film about a woman being protected by FBI agents after her her thief-of-a-boyfriend gets killed. Did Stewart take umbrage with his sweat and blood, released in 1989, having been branded as “crap?” “I think he knew. In fact, sometimes I think they do it on purpose,” he says laughingly.)

One last time: if we pinky swear to keep our lips sealed, will Asmundson reveal what festive flick he’s going with, for this year’s A Very Crappy Christmas?

“All I can tell you is it’s definitely a Christmas movie,” he says, leaning back in his chair. “OK, it takes place during Christmas. All right, Christmas is in the title, but past that, it’s probably debatable whether it’s a Christmas movie or not.”