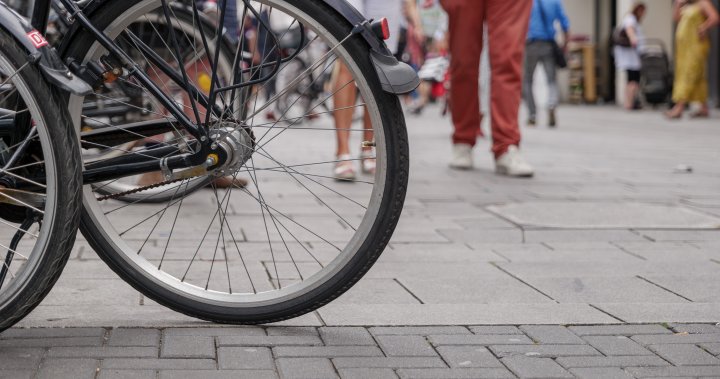 As the price of gas continues to soar, more Winnipeggers are ditching their cars and hopping on a bike, according to a cycling advocate who has been using pedal power to get around for years.

Mark Cohoe, the executive director of Bike Winnipeg says he’s been seeing more and more bikes on the roads and trails this summer.

“This year, what we’re seeing, you know, if I bike down Assiniboine and I get to the Osborne set of lights, it’s regular now that I see people waiting. So I see a stack of people waiting to get across there. And that’s something I hadn’t really seen before,” Cohoe said Tuesday.

“I think a lot of people are at least making more trips on the bike — they’re at least taking away a portion of … their vehicle trips.”

Nearly seven out of 10 Canadian drivers say they’re worried they won’t be able to afford the cost of gas this summer, according to the results of a recent Ipsos poll conducted exclusively for Global News.

Of those surveyed, 75 per cent said they’re driving less in order to save on costs at the pump.

Global News caught up with Chris Victor as she was cycling home to St. Boniface after spending a morning at the Pan-Am Pool Tuesday.

Victor said she’s an avid cyclist, and while she has two vehicles at home, she still chooses to use her bike more.

“It definitely makes a difference on what I’m spending on gas,” she said, adding that while she’s cycling in the summer she fills up her tank maybe once a month.

“It’s still a sticker shock at the gas pump, but yeah, if I can cycle, I will cycle wherever I possibly can.”

Cohoe says as well as saving money at the pumps, many of the new cyclists might also be turning to two wheels as a way of combatting climate change.

And there’s also the health benefits.

“Everything is sort of converging,” he said.

Cohoe says with more cyclists on the road, it’s important that the City of Winnipeg maintains roads and sidewalks and expands bike infrastructure, like adding more protected lanes.

“The city has a plan that they want to get more people biking, but they need to make sure they’re spending on that,  that they’re investing in improving cycling facilities” he said.

“Because right now there’s huge demand to get biking. But unless people feel safe, unless they have a direct, connected route to get them from the point they’re starting out to where they’re going, they’re not compelled to make that switch.”

The city tells Global News it has counters out on the streets right now, monitoring how many cyclists have been out and about during the month of June.

Those numbers are expected to be released in the coming weeks.

— with files from Marek Tkach