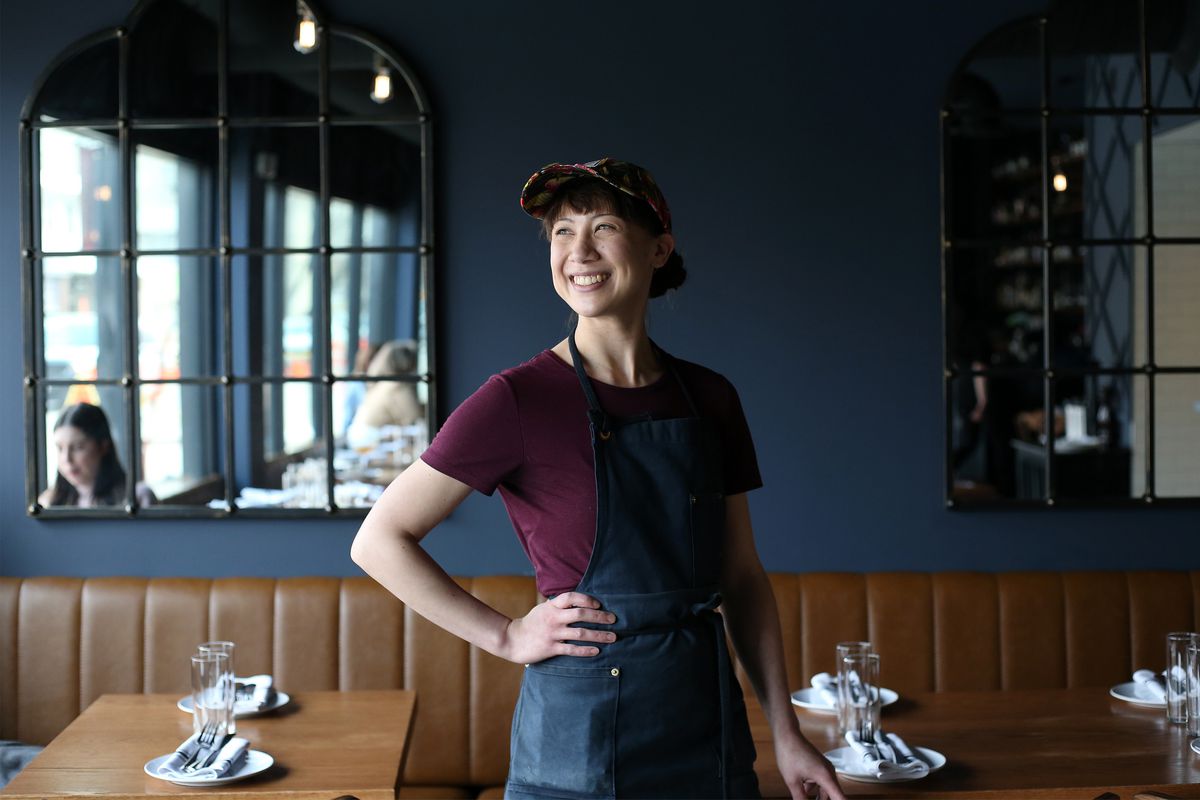 Atmosphere: Long narrow room that is, seemingly, always abuzz with an open kitchen tucked into the back corner.

Additional information: Open for lunch and dinner Tuesday to Friday, dinner only on Saturday and closed Sundays and Mondays. Reservations are highly encouraged. 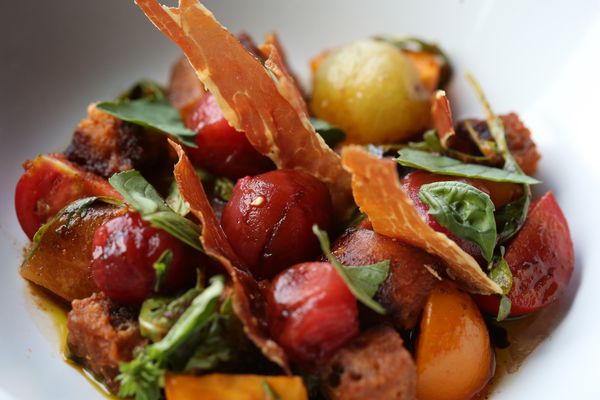 It had been much too long since I dined in Winnipeg the night I first popped into the new and buzzworthy Nola several months back.

The city’s small but truly dynamic food scene is often overlooked by Canadians in other hot spots such as Toronto, Montreal and Vancouver … but do you think Winnipeggers care?

Not in the least. They know that what they’ve got in their home base is pretty awesome.

One of the newest spots to get excited about in Canada’s most central city is Nola. Co-owned by the folks behind Burnley Hospitality and Top Chef Canada alum Emily Butcher, you’ll find the charming eatery in Winnipeg’s French quarter, St. Boniface.

Ms. Butcher has long been a fixture of the Winnipeg food scene, primarily working under Mandel Hitzer at the acclaimed Deer + Almond for years. It is nice to see her breaking out on her own these days and creating food on her own terms.

The room itself is unfussy in its design with a grey-blue colour scheme throughout, mirrors but no artwork (which I always find somewhat odd), warm brown leather banquettes and an open kitchen in the back corner where guests can sit directly in front for a chef’s bar experience. Most of the atmosphere comes courtesy of the room being full, which I am under the impression is practically every single day. When it’s abuzz, and the lights are turned down, it boasts a cool vibe.

Kick things off here pleasantly with a royal rhubarb cocktail made with Crown Royal (which is produced in Gimli, Man., if you didn’t know), rabarbaro, grapefruit, prosecco and honey. The wine menu here isn’t overly robust, but rather concise with some funky options to go along with what you’re ordering.

The chef’s menu at Nola offers plenty of nods to her Chinese-Canadian roots. It’s fusion – for lack of a better word – and for the most part, her dishes are very enticing.

Let’s start with her scallion sourdough, which comes as several lightly toasted slices and served with a caramelized onion butter. A playful ode to green-onion cake, this is a bread I would buy to take home by the loaf.

The pan-fried “reuben” dumplings are equally playful and delicious. The wasabi mustard sauce is nice and punchy while the sweet soy sauce drizzled over top gives a nice hit of richness to bring everything together.

A springtime visit to Nola saw a smattering of new (to me) dishes such as the chefs’ beef and beet tartare, a clever combination of diced Manitoba beef and pickled beets topped with a mustard yolk sauce, green goddess and fresh dill. It is very lovely.

I am always wary to order a tomato salad outside of peak season, but our server was quick to inform me that Murray’s tomatoes (greenhouse-grown) are something Manitobans are quite proud of and that they would be top notch in this particular salad preparation. The mixture of fresh and marinated tomatoes tossed in a roasted tomato vinaigrette along with compressed melon, crispy shards of prosciutto, basil leaves and croutons was quite satisfying. It almost tasted like summer had arrived, though there was still some snow on the ground at the time. 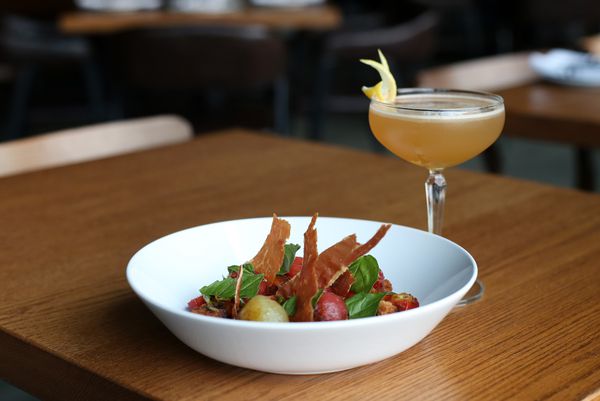 It’s not all hits at Nola, though, as the chef sometimes has a habit of putting too many components on the plate.

An example of this would be the roasted pork belly dish in which chunks of pork belly are served with everything but the kitchen sink: braised radishes, peanuts, coconut rice, Thai green-curry sauce, pickled mango, fresh herbs, pickled onions, seared onions and more. As colourful as this dish was, it was all too clunky and wound up being the only thing on the table left unfinished by my friends and I.

The loaded potato gnocchi, a dish that Ms. Butcher won an episode of Top Chef Canada with, doesn’t necessarily disappoint, but isn’t nearly as dynamic as other items on the menu and feels a bit lacking and not as substantial as it should be for $21. Love the sauerkraut beurre blance element, though.

Back to the great. The stand-out savoury dish at Nola is, without a doubt, the seared scallops with smoked goldeye turnip cakes. The chef uses the popular Manitoba lakefish in lieu of dried shrimp and scallops to truly fuse together her love of local ingredients with a traditional Chinese dish. The scallops and turnip cakes are nestled into a large bowl with a black bean xo sauce, dehydrated apple, napa cabbage and what I can only describe as a wildly tasty and tangy fermented radish beurre blanc.

I would go as far to say that it’s the best dish I’ve had in Canada this year.

As well, I cannot stop thinking about the chef’s superbly unique cheesecake. 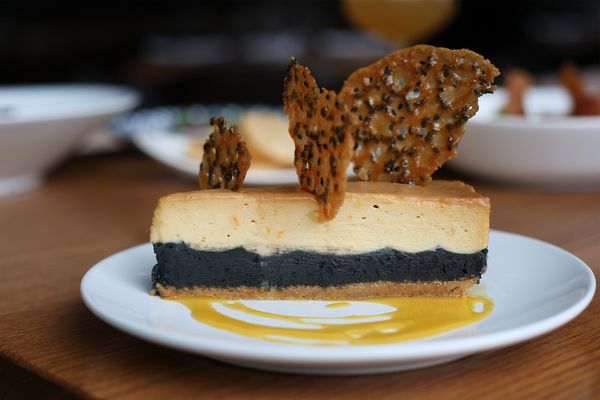 Parsnip and black sesame cheesecake at Nola.Shannon VanRaes/Globe and Mail

The two-layer cake is striking upon arrival being made with one-part black sesame and one-part parsnip topped with caramelized, crunchy tuile. The nutty, sweet-tasting sesame mixture along with the earthy (and also pleasantly sweet) parsnip mixture makes for a forkful of cheesecake that will wow your taste buds. An orange couli sauced on the base of the plate also adds a nice brightness to the indulgent cake.

If someone has yet to fly to Winnipeg specifically to eat a slice of cheesecake, I may wind up being the first to do so.

Baton athlete in Winnipeg getting ready for Canadian championship