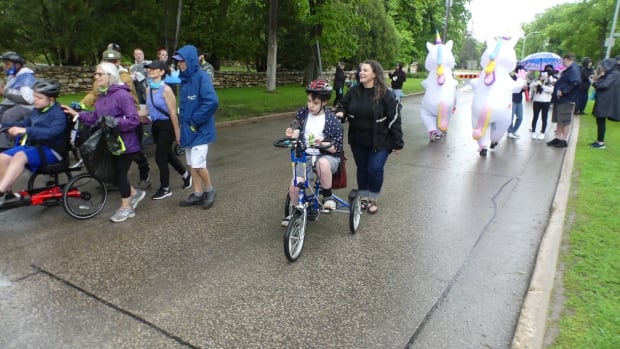 After a two-year break due to the pandemic, hundreds of people participated in a fundraising event in Winnipeg on Sunday in support of children and youth living with physical and developmental disabilities.

About 200 to 300 people walked, wheeled, ran and skated down Wellington Crescent for the 26th annual Crusin’ Down the Crescent in support of the Rehabilitation Centre for Children, which supports children living in Manitoba, northern Ontario and Nunavut.

Jane Kidd-Hantscher, the executive director of the Children’s Rehabilitation Foundation says the donations, which totalled about $115,000, are very meaningful.

“All of the funds raised today will go to support vital programs, equipment, technology and research undertaken by the Rehabilitation Centre for Children,” she said at the event.

“There’s been some tremendous fundraising going on leading up to today, and we’re just so thrilled to be back in action after a couple of years’ hiatus.”

Hundreds of people took part in the Cruisin’ Down the Crescent fundraiser on Sunday. (Darin Morash/CBC)

Zach Gallagher took part in the event on Saturday, despite some rain.