A landmark building in downtown Winnipeg, whose heyday has long since passed, is an important historical structure that needs protection, says a city committee.

The Historical Buildings and Resources Committee is pushing for the Hudson’s Bay Company store at Portage Avenue and Memorial Boulevard to be added to the city’s list of historical resources, calling it “one of downtown Winnipeg’s most iconic buildings.”

However, representatives from The Bay are opposed to the idea and have written to the city to argue against it.

The six-storey structure, which opened in November 1926, has several character defining elements, states a report from the committee.

The curved elevator lobby is cited as one of the character defining elements of The Bay. (Darren Bernhardt/CBC)

The HBC’s one-storey garage on Garry Street is also being recommended for addition to the historical list.

In a letter to the city, Franco Perugini, a vice-president with the HBC, said the company opposes the recommendation on the basis that the character defining elements “are too costly to maintain and restore” and in some cases, replacement parts simply do not exist any longer.

Being added to a historical list would require a building’s owners to maintain the character of the structure or require permission to make changes. At the same time, owners are eligible to apply for heritage grants and other incentive programs from the city and province. 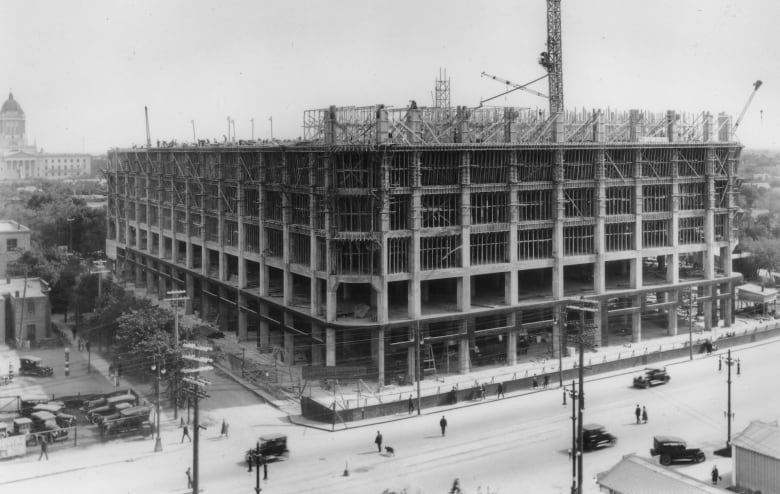 The Hudson’s Bay under construction in downtown Winnipeg in 1926. (hbcheritage.ca) 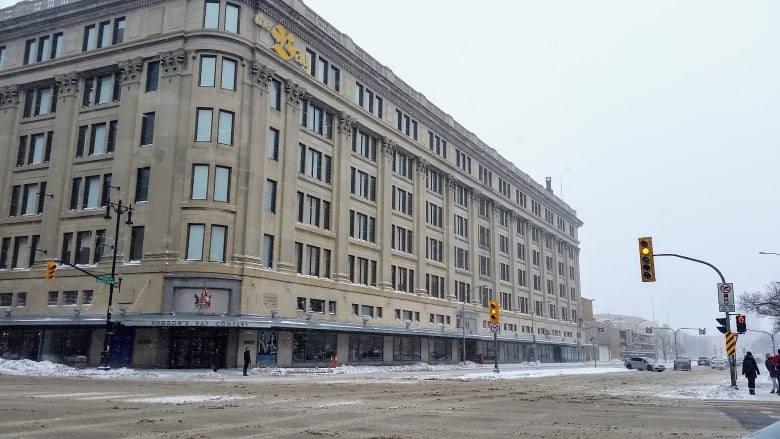 Once spread across its six floors, the retail section of The Bay is now condensed on the first two floors. (Darren Bernhardt/CBC)

The 675,000-square-foot HBC building was the company’s flagship in all of Canada until 1974 when it was supplanted by a new store in Toronto’s Hudson’s Bay Centre.

The Winnipeg store once boasted crowds of shoppers and a multitude of departments stretched throughout its six floors — including a restaurant, the largest fur storage vault in western Canada, a beauty parlour, public telephones, a post office, a library, and an auditorium with its own orchestra.

In 1930, its rooftop was also the site of one of a series of aerial navigation beacons installed in western Canada. It was first lit March 3, 1930, the day of the inaugural airmail flight from Winnipeg to Calgary, according to HBC Heritage, an online history of the Winnipeg store.

“On opening day, promptly at 9 a.m., George F. Galt, member of Hudson’s Bay Company’s Canadian committee, inserted a golden key into the lock of the central Portage Avenue entrance and led a crowd that marched down the aisle 12 abreast for nearly an hour before its pace somewhat slowed,” HBC Heritage reports.

The store has since shrunk its retail space to just two floors as the crowds have largely moved on to suburban shopping malls and online retailers.

Q&A: Winnipeg MasterChef contestant dishes about cooking after being eradicated from present