Six people were sent to hospital, including three in critical condition, after a Christmas-morning fire in a downtown Winnipeg walk-up threatened to trap people — including some with disabilities — inside their apartments.

Dozens of residents of the Warwick Apartments, a 113-year-old heritage building at the edge of the Central Park, were forced out of their suites on a –26 C morning in what a Winnipeg deputy fire chief calls a “very severe” incident.

The fire broke out just before 4 a.m. in the six-storey building, which serves as public housing. The Winnipeg Fire-Paramedic Service said it initially received reports of multiple residents trapped inside their apartments.

Deputy fire chief Tom Wallace says dozens of firefighters, paramedics and social services workers were summoned to put out the fire, clear heavy smoke from building’s hallways, get residents out and shepherd them into Winnipeg Transit buses.

A total of 42 people are now without homes, he said. Of the six sent to hospital, three were in critical condition and one was unstable.

‘I just got out of bed really, really fast’

“There’s a lot of individuals in this apartment block, but for us to have three critical patients and one unstable patient transported in addition to another three other patients to hospital, that’s a significant incident for us on any day, let alone Christmas Day,” Wallace said in a telephone interview.

The fire-paramedic service was initially told numerous people were trapped in the Warwick. Firefighters used stair chairs to help some residents out of the building, while others made their way down the stairs on their own, Wallace said.

Darren Nash is among 42 people forced out of their apartments due to the fire. (Bartley Kives/CBC)

Darren Nash, who lives in an apartment on the Warwick’s fifth floor, said he heard fire alarms go off for 30 to 45 minutes before he smelled smoke.

“That’s when I got scared. I just got out of bed really, really really fast and just put on my pants. I didn’t even have time to put on my belt,” he said outside the Freight House in central Winnipeg, where dozens of Warwick residents spent several hours while city and provincial officials found hotel rooms for them.

“I just went out the door because I was really scared. As soon as I opened the door, [I saw] a whole bunch of smoke out in the hallways and it was kind of hard to see. But I tried to stay calm as much as I could and I went out the nearest fire exit and made my way to downstairs and out the door.”

Outside the Warwick, Nash said he was scared further by what he described as “a little explosion” within the Warwick and watched as about a dozen emergency vehicles pulled up to the building.

Deputy fire chief Wallace said residents and crews had to contend with both the cold and the early hour of the fire.

“It was a very challenging incident for us and I’m just grateful for our staff at being able to meet the demands of the incident, being creative with having to manage so many patients, particularly on Christmas Day,” he said.

As noon approached, some residents who were provided with shelter at the Freight House boarded a Winnipeg Transit bus with the expectation they would be able to retrieve clothing or medication from their apartments before they were taken to temporary lodging at a hotel. 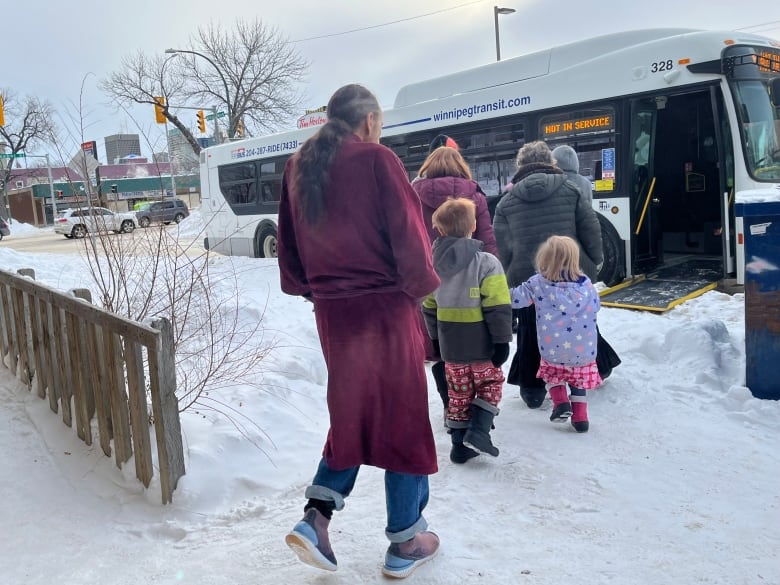 Warwick residents displaced by the fire board a Winnipeg Transit bus on Sunday morning outside the Freight House. (Bartley Kives/CBC)

As of the noon hour on Christmas Day, Wallace said he did not know the condition of the six patients taken to hospital. The fire-paramedic service also did not yet know the cause of the fire or have a cost estimate of the damage to the building, which initially opened in 1909 as a luxury block.

The apartment building was among the first in Winnipeg with an interior courtyard and bay windows on every side of the structure, according to the Winnipeg Architecture Foundation. It received a $3-million renovation in 1986, when it was converted into public housing.

Manitoba Housing did not immediately respond to a request for comment about the fire at the structure.

Nash said he feels lucky he was awake when the alarms went off.

“I was thinking what would have happened if I fell asleep?”

Wholesome Jets on roll, whereas Penguins intention for consistency