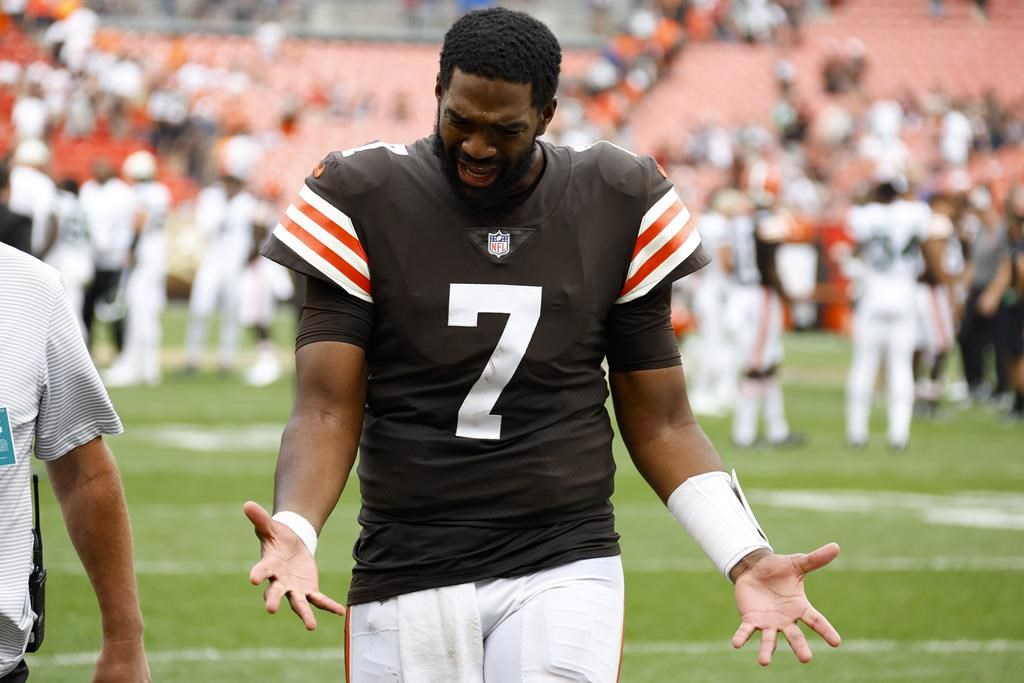 “Sorry,” he said, surrounded by reporters in a corner of Cleveland’s quiet locker room. “Still in shock.”

He wasn’t the only one. Anyone inside FirstEnergy Stadium or watching on TV was just as stunned after Cleveland blew a two-touchdown lead in the final 1:55 and lost 31-30 to the New York Jets on Sunday.

The Browns (1-1) were moments from their first 2-0 start in 29 years when the floor fell out from under them. An epic collapse, even by Cleveland’s lowly standards.

A home opener with the usual pomp and plenty of positives before an energized, sellout crowd will instead be remembered for all the wrong reasons.

Leading 30-17 with 1:55 left, the Browns missed an extra point, gave up a 66-yard TD pass with 1:22, failed to recover an onside kick and then let Joe Flacco finish them with a 15-yard touchdown pass to rookie Garrett Wilson with 22 seconds left.

Cleveland’s last chance ended when Jacoby Brissett, who played the final few minutes on a sore ankle, threw an interception with six seconds to go.

As Flacco dropped to his knee at mid-field — directly on top of Cleveland’s elf logo making its comeback debut — to run out the clock, the Jets celebrated wildly on their sideline while some in the home crowd let the Browns know how they felt.

“I mean the more disappointing thing was the booing at the end,” said star defensive end Myles Garrett. “It was not the most optimal ending that we’d want. Of course we’d want to win. Of course we wanted to play out the game and it end 30-16 or 30-17 or whatever it was, we get a pick or a strip-sack and end the game.

“But that’s not always how it goes.”

The Browns have little time to dwell on their collapse. They host the Pittsburgh Steelers on Thursday night.

According to ESPN Stats & Info, teams had won the last 2,229 consecutive games when leading by at least 13 points in the final 2 minutes. The last team to blow such a lead was the Browns in 2001 at Chicago.

When Nick Chubb scored his third rushing TD with 1:55 left, the Browns were in command up 13. And that’s when things began to unravel.

Actually, the Jets were thankful Chubb scored since they had used their third timeout with 2:09 remaining. If Chubb had stayed in bounds, the Browns could have run out the clock at their goal line.

Instead, they gave the Jets an opening.

But rookie Cade York, who made a 58-yard field goal to beat Carolina in his pro debut last week, pushed his PAT to the right.

The point didn’t seem important at the moment, but suddenly became vital when Jets wide receiver Corey Davis got behind Cleveland’s secondary and Flacco hit him for a long TD with 1:22 to go.

It was another defensive breakdown for the Browns, who had several last week when they let the Panthers rally.

“That’s two weeks in a row and that’s not acceptable,” said cornerback Greg Newsome II. “That’s not the brand of football we play. That’s not what we talk about being the best defense in the NFL. We gotta be better.”

The onside kick was next and that didn’t go Cleveland’s way either as receiver Amari Cooper couldn’t come up with the ball.

“There’s a tool, you can bat the ball out of bounds if you need to,” said safety John Johnson III, who was on the “hands” team. “We probably should have used that tool.”

That left things in the hands of the Browns defense. But Garrett, who had gotten to Flacco earlier, was worn out and couldn’t come up with a big play. It didn’t help that end Jadeveon Clowney had gone down with an ankle injury.

Flacco then found a streaking Wilson, who split Cleveland’s secondary for a TD grab that sucked the air out of the stadium.

There was plenty to second guess, but Browns coach Kevin Stefanski didn’t want to dwell on a game that slipped away.

“Everybody’s going to want to point fingers and say, ‘Whose fault was this?’ Put it on everybody,” he said. “It’s all of us, me, coaches and players. It’s everybody. What we can’t do is let this linger because we have a game Thursday night against a division opponent right back here.