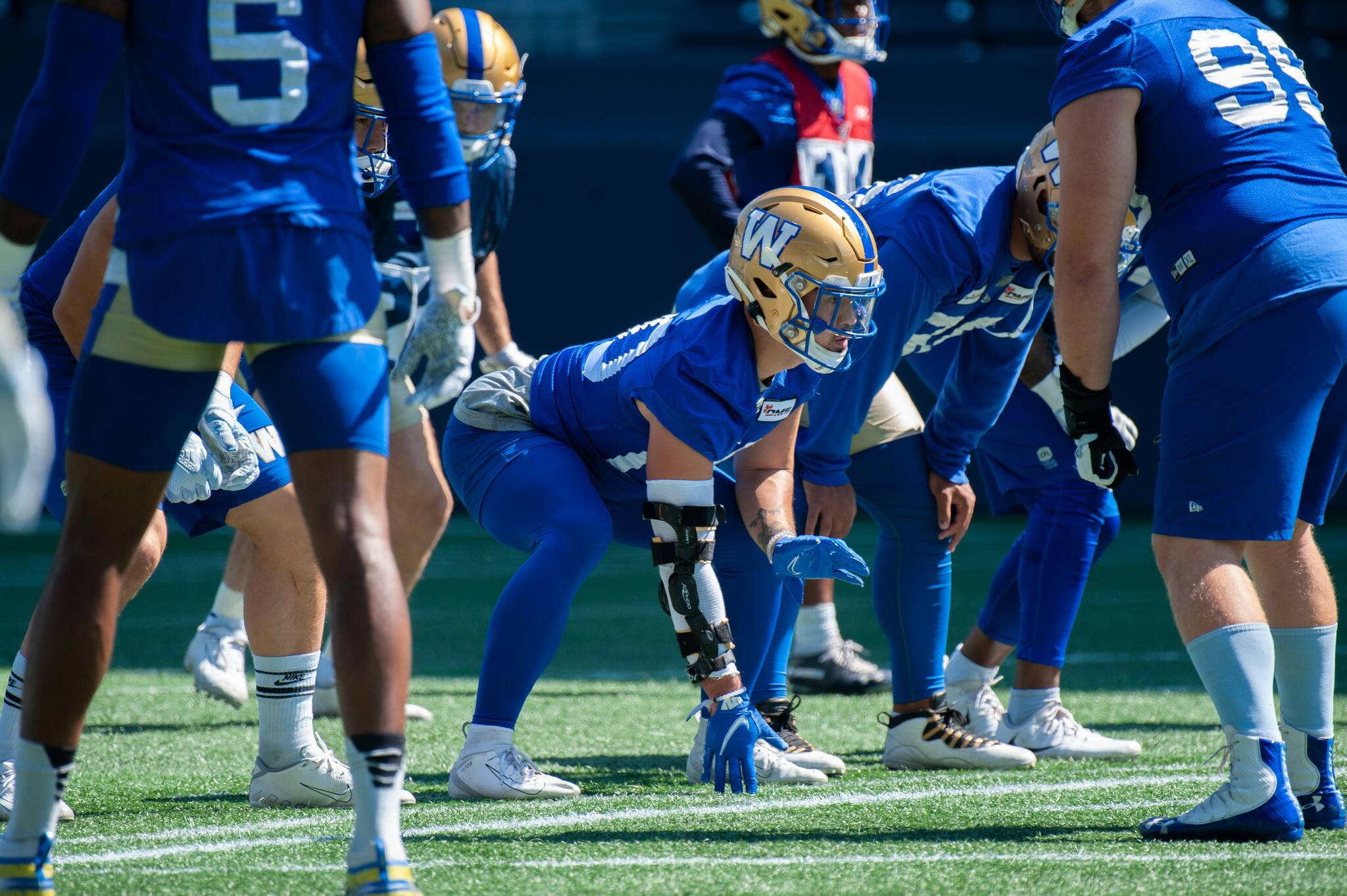 If the CFL ever does a presentation on the league’s Global initiative, this will be the play they show.

Winnipeg Blue Bombers linebacker Les Maruo, who was chosen fourth overall in the 2021 Global Draft, sprinted around the edge in the second quarter of Friday’s 24-10 victory in Edmonton and took down Elks quarterback Taylor Cornelius for his first career sack.

But Maruo wasn’t the only Global player on the field as German defensive lineman Thiadric Hansen was there trying to get to Cornelius as well.

No one has gotten more out of their Global players than the Bombers.

“He was really the first guy to come up to me and celebrate with me. That just meant a lot because he’s been my big brother. Even before I got here, I was asking him questions about the CFL and playing for the Winnipeg Blue Bombers,” Maruo said after Tuesday’s practice at IG Field.

“Even last year in the second half of the season when I was on PR, he was always encouraging me to keep going. For him to be there and be the first guy to come up to me was a really cool moment to have.”

Maruo, who was born in Japan, grew up in Kansas, and played college ball at the University of Texas-San Antonio, spent most of his rookie season playing special teams or sitting on the practice roster. Now in his second year, Maruo has gotten some snaps on defence as the Bombers have been hit hard at linebacker with Jesse Briggs, who’s close to returning, and Kyrie Wilson, who’s likely out for the year with an Achilles, missing time with injuries.

Maruo, 26, has tried to make the most of his snaps on defence, for more than just your typical reasons.

“As a Global guy, I feel like everybody kinda, I mean, they don’t tend to do it on purpose, but they kind of look down on us because we’re from a different country. Especially me, I’m from Japan and a lot of people think Japanese players can’t play football,” Maruo said.

“But you know, I’ve been working hard every single day. I’m always in the weight room, always doing extra stuff, and I think that’s where I earn the trust from my teammates and coaches.”

Former Bombers quarterback Chris Streveler is getting another NFL opportunity. The 27-year-old Streveler signed with the New York Jets on Tuesday.

This is now Streveler’s fourth NFL team as he’s been under contract with the Arizona Cardinals, Baltimore Ravens, and Miami Dolphins since helping the Bombers hoist the 2019 Grey Cup. Streveler has only seen game action with the Cardinals, where he completed 17-of-25 pass attempts for 141 yards, one touchdown, and one interception over two seasons with the team as a backup option to Kyler Murray. He also rushed the ball seven times for 21 yards. Streveler was released in May by the Dolphins after a brief three-month stint with the organization during the off-season.

Kelce, widely considered one of the greatest tight ends to ever play the game, got to know Schoen a bit last year as the receiver had a stint on Kansas City’s practice roster. So when Schoen became a Bomber, Collaros hit up his old pal for some insight.

“I said ‘Do you remember this kid?’ And he said ‘Yeah, I liked him a lot. He’s a really good receiver and he’s able to run the entire route tree.’ He thought he was going to stick and he was right,” Collaros said on Tuesday.

With another big game last week, four catches for 146 yards and an 81-yard touchdown, Schoen has put himself in the conversation for the CFL’s Most Outstanding Rookie award.

Eighteen years old and still in high school, Taylor got his start with the Free Press on June 1, 2011. Well, sort of…