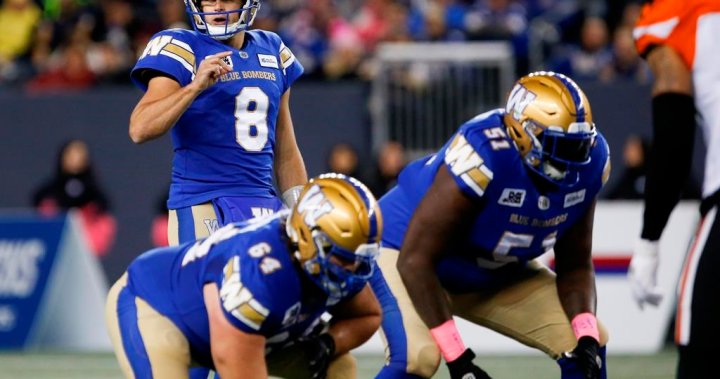 The Canadian Football League announced the finalists for its annual year-end awards and after being the class of the CFL all season long, the Winnipeg Blue Bombers are well represented.

Three of the Bombers six team award winners are nominated for CFL Awards, along with the head coach.

The CFL’s reigning most outstanding player Zach Collaros is once again the West Division nominee for the MOP award, and he’s pretty much a shoe-in to win it again.

The 34-year-old MVP quarterback managed to improve in almost every statistical category and posted his first career 4,000 yard passing season.

Only four players in CFL history have been named the most outstanding player in back-to-back seasons. Montreal Alouettes quarterback Anthony Calvillo was the last in 2008 and 2009. The East Division finalist is Als receiver Eugene Lewis.

Receiver Dalton Schoen was an easy choice as the West Division finalist for the Most Outstanding Rookie Award. He’s also a lock to win it after one of the most impressive rookie seasons in CFL history. He led the league in receiving yards and receiving touchdowns. The last Bomber to win top rookie was receiver Chris Matthews in 2012. The Als Tyson Philpot is the East nominee.

Stanley Bryant is a finalist for Most Outstanding Offensive Lineman for the sixth time in his career. Bryant is already the only three-time winner in the awards history having won just last season, and previously in 2017 and 2018. He’s nominated against the Hamilton Tiger-Cats Brandon Revenberg.

And head coach Mike O’Shea is the West Division finalist for Coach of the Year after guiding the club to a franchise record 15 wins. O’Shea also won the award in 2021.

Calgary Stampeders defensive lineman Shawn Lemon was chosen over Jefferson for top defensive player and is nominated against the Ottawa Redblacks Lorenzo Mauldin IV from the East.

Lions quarterback Nathan Rourke is the West Division finalist for the Most Outstanding Canadian Award. He’s up against the Argos’ Kurleigh Gittens Jr.

And Mario Alford of the Saskatchewan Roughriders and Chandler Worthy from the Alouettes are the finalists for the Most Outstanding Special teams Player.

All the winners will be announced at the annual CFL Awards ceremony on November 17.

Jets tackle the Canadiens in a non-conference matchup