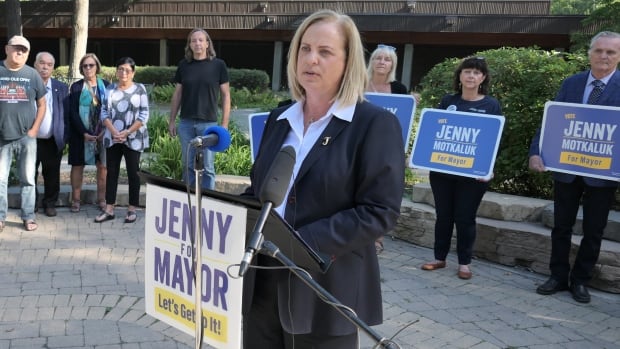 In her first major policy announcement since launching her campaign, the business consultant and runner-up in Winnipeg’s 2018 mayoral election says she wants the city to stop increasing the tax bill for homeowners who improve their homes by adding a new deck or finished basement, and eliminate the photo radar traffic ticket program.

To make up for the lost revenue, Motkaluk says she would freeze wages for all city workers who make more than $75,000 a year.

“I will not increase taxes on struggling Winnipeggers so that we can give raises to civic employees who are already making more than $75,000 a year,” she said during a campaign announcement with a group of supporters in front of the Kildonan Park Pool.

There are more than 4,000 city employees on the compensation disclosure list, and Motkaluk says every one of them would have their wages frozen once their existing collective bargaining agreement agreements expire.

“My position is that we’re going to freeze the wages of everyone of Winnipeg’s highest-paid employees until the rest of Winnipeg has a chance to revive and then thrive,” she said.

The head of the city’s largest union called Motkaluk’s plan “unrealistic” and said it would worsen problems with recruitment and retention.

“It sounds like a desperate attempt by a mayoral candidate that is out of touch with Winnipeggers and working-class families,” said Gord Delbridge, president of Canadian Union of Public Employees Local 500.

“The last thing we need to be seeing right now at this point in time is cuts and wage freezes.”

He also said the plan could interfere with collective bargaining agreements between the unions and the city.

“We’re in negotiations now and by the time our contract expires, it’ll be well past the … first term for this mayor. So it’s a promise that will not be met.”

Motkaluk is running to replace Brian Bowman, who is not seeking a third term as Winnipeg’s mayor.

She also said Wednesday she would push to reverse a decision by The Forks to change Canada Day celebrations in light of the discovery of potential unmarked graves at former residential school sites.

“This year there was some controversy about whether or not we should celebrate Canada Day, and I’m a proud Canadian and I love my country … unconditionally,” she said, drawing applause from her supporters with the campaign pledge.

Motkaluk also said she would replace the three city-appointed members of the Forks North Portage Partnership board with people who would support her vision of the Canada Day event.

She also wants to put Winnipeg police officers on city buses, and would lobby the provincial government to eliminate the Winnipeg Police Board as part of its planned review of the Police Services Act.

On infrastructure, Motkaluk would extend northeast Winnipeg’s Chief Peguis Trail west to Route 90, and build water and sewer services to CentrePort, in order to spur development.

Motkaluk captured 36 per cent of the popular vote in 2018, losing to Bowman, who received 53 per cent.

She is one of 15 candidates running for mayor in the Oct. 26 election.

Several other mayoral candidates made campaign announcements on Wednesday.

Rana Bokhari released a plan meant to encourage owners of surface parking lots to develop their properties, saying she wants to amend zoning bylaws to reduce the number of parking spots businesses must have.

Mayoral candidate Scott Gillingham promised Wednesday to improve Winnipeg Transit service by adding dozens of buses over the next few years. He plans to bring Transit back to its full pre-pandemic service level in 2023 by adding more than 50 buses, followed by another net increase of 11 buses every year to the busiest routes from 2024 to 2026.

He also said he’d speed up changes to routes outlined in the city’s transit master plan and launch the new on-request suburban services outlined in the plan, starting with Castlebury Meadows-Waterford Green routes in northwest Winnipeg in 2023.

And candidate Chris Clacio released a document outlining his proposals to forge a new relationship between the municipal and provincial governments. He also called on Manitoba to draft its own constitution.