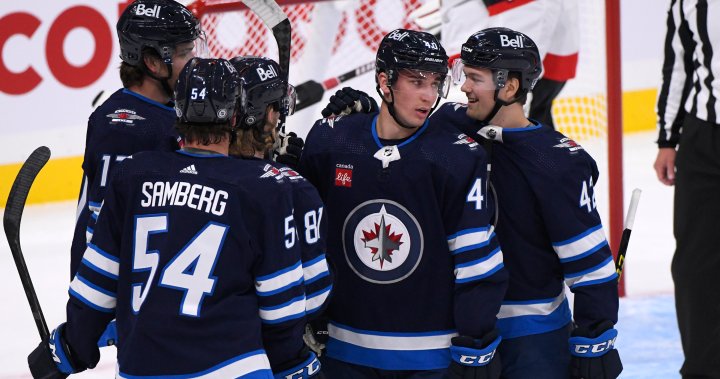 There will be a ton of talk early in this NHL season about Rick Bowness and his communication skills — his “velvet hammer” approach, if you will. After all, Rick was brought in to change some of the culture… the veteran culture.

But the Jets are more than veterans, and certainly more than just this season. And while relying on a coach in his late sixties, there are a few young men who will help reshape the future of this team. We may not see them this season, but we should keep an eye on them.

Daniel Torgersson, age 20, who was the Jets’ second-round pick in 2020, has honed his skill in Sweden both on the club level, but also at the national team level. Some might remember that he played two games for the Moose last season. After Tuesday’s two-goal performance, Torgersson admitted that those two games in the AHL were a great help in acclimatizing him to the city, the smaller ice and the organization.

Brad Lambert is another one to watch, at age 18… he’s the young Finn with the Canadian name. Taken 30th overall in July, he’s actually played more games with men than most 18-year-olds. He’s a centre by choice, and needs to get used to the smaller ice. If he has a calling card, it’s his skating. He has great speed — intimidating speed — that puts defenders on their heels. And as everyone knows, hockey is now a game of speed.

ANALYSIS: Who gets the letters in Jets’ quest to expand team leadership?


Winnipeg Jets’ Rutger McGroarty puts on his jersey during the first round of the 2022 NHL Draft Thursday, July 7, 2022 in Montreal.

Rutger McGroarty is also 18 and was picked 14th in last summer’s draft. McGroarty is going to play at the University of Michigan this season. The Wolverines’ track record of building NHL players has been legendary of late: Owen Power, the Hughes boys, Kent Johnson, Zack Werenski and, yes, Kyle Connor all wore the maize and blue. McGroarty’s leadership skills are well-known, his scoring from the right side is well documented. McGroarty is certain to be part of the future of this squad.

…A squad looking to rebuild its culture.

So as much as most people feel it’s a “win now” attitude for the Jets, this season, with a new coach and some really great prospects, might actually be the best way to secure a solid future and a better culture, a building block season for a team with some very bright prospects. Not just win now, but win for a long time.