A large chunk of Winnipeg’s Exchange District, now recognized as a national historic site, was once poised to be pulverized.

In its place, a renewal scheme called for the area east of Main Street to be rebuilt with modernist architecture, an amusement park and a tangle of expressways.

“That would have been an absolute travesty,” said Cindy Tugwell, executive director of Heritage Winnipeg, who warns the area’s buildings face a different challenge today — a lack of support for heritage preservation.

Buildings like these in the East Exchange District would have been demolished if the full Cultural Centre Renewal Scheme had gone through. (Google Street View)

In the 1960s, though, civic leaders around North America were struggling with ways to inject new life into their downtowns, which were decaying as urban sprawl attracted people to suburbs.

​Winnipeg was no different.

Though it is in a renaissance now, there was a time when the Exchange District had a high vacancy rate and many of the buildings were showing signs of neglect, boarded up and for sale.

“Most of these buildings, if you talk to people who started developing in the early 1970s, you could almost get a building for ​$1. They were giving them away,” said Tugwell. “There was nobody that wanted to come downtown.” 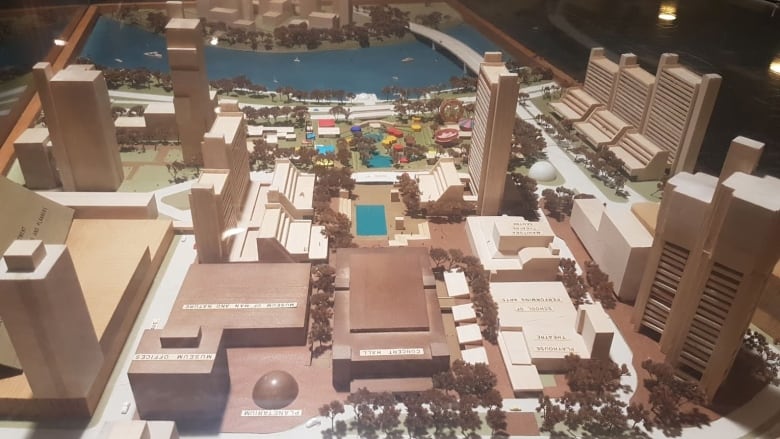 A view of the renewal plan’s scale model, with the dome of the planetarium in the foreground. (Darren Bernhardt/CBC)

An earlier renewal plan led to the demolition of the original Old Market Square building and a block of other structures to make room for the current city hall and administration buildings in 1962-63.

‘City of the future’

​In 1965, the city rolled out the Cultural Centre Renewal Scheme (CCRS), a new plan that called for the complete redevelopment of nearly 250 hectares of land in the East Exchange, bordered by Main Street and the Red River and stretching from The Forks to Point Douglas. 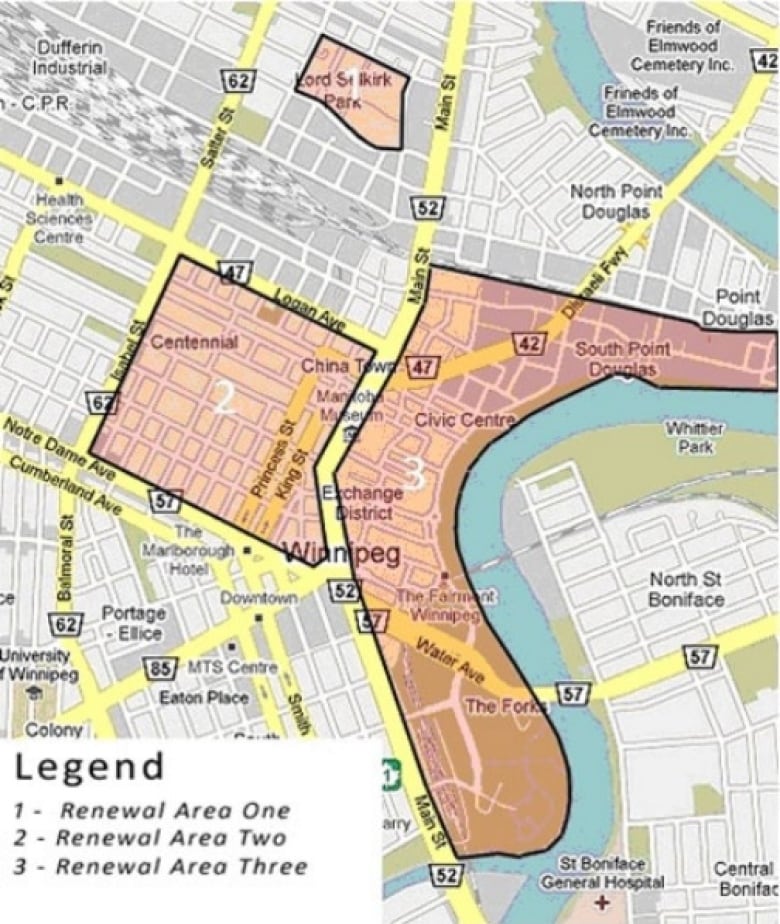 The Cultural Centre Renewal Scheme initially sought to redevelop the entire area marked as No. 3, along the river from The Forks to Point Douglas. Budget constraints curtailed it to the area from Main Street to the river, directly across from city hall. (Murray V. Jones & Associates)

All of the buildings were to be modernist, replacing brick character warehouses with Jetsons-like highrises that more resembled horizontal blinds or louvered exhaust vents.

It would all be girded by new expressways, including a Red River Parkway that would link up with the Disraeli Freeway and continue south through the rail yards (now The Forks), behind Union Station and eventually hook up with Stradbrook Avenue.

Bannatyne and McDermot avenues, as well as a rerouted Higgins Avenue, were also to be extended as expressways across the river into St. Boniface and through Whittier Park. 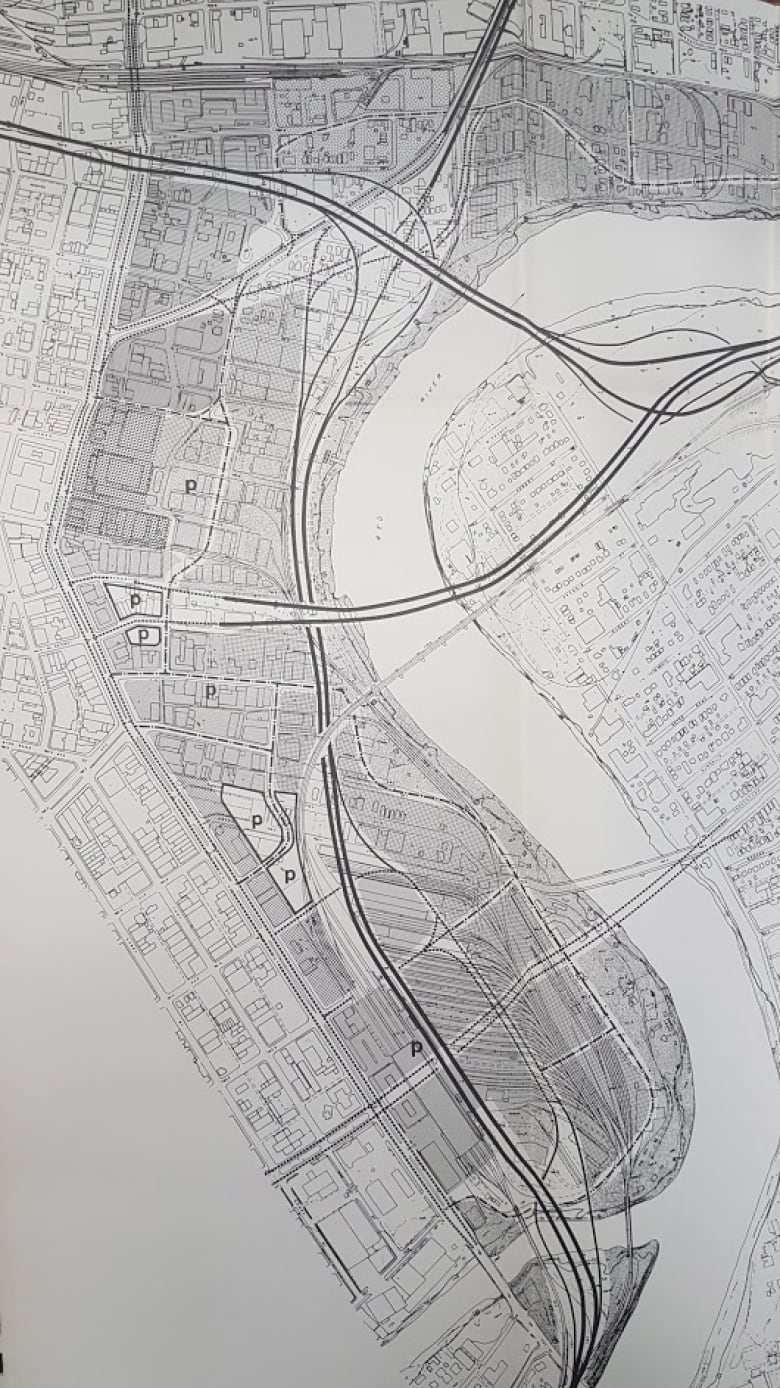 The dark lines represent expressways that were intended to be created as part of the Cultural Centre Renewal Scheme. (City of Winnipeg Archives)

A scale model of the area was created and put on display in January 1966, inside the Portage Avenue Eaton’s store, to build excitement among the public.

The project was compared to the famed Tivoli Gardens, a 175-year-old amusement park in Copenhagen, Denmark. The CCRS final report suggested the Winnipeg development could be a similarly popular entertainment and leisure area.

The scale model and a brief history of the project are once again on display, thanks to the Winnipeg Architecture Foundation, in the lower level of the Centennial Concert Hall. 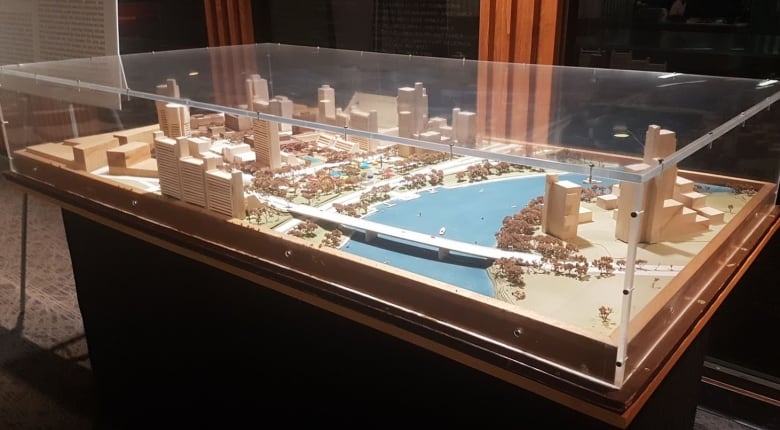 A scale model of the proposed renewal scheme is on display in the lower level of the Centennial Concert Hall. (Darren Bernhardt/CBC)

At the time the plan was being pitched, Mayor Stephen Juba declared it would turn Winnipeg into a 21st-century “city of the future.”

Tugwell said that exemplified the mentality of politicians in the 1960s all across Canada, wanting to boost their economy by modernizing their cities.

“So tearing down heritage buildings seemed the logical step,” she said.

“They thought it would be cheaper to raze everything and start fresh than look at building-by-building and area-by-area, and deal with the existing [infrastructure],” she said. 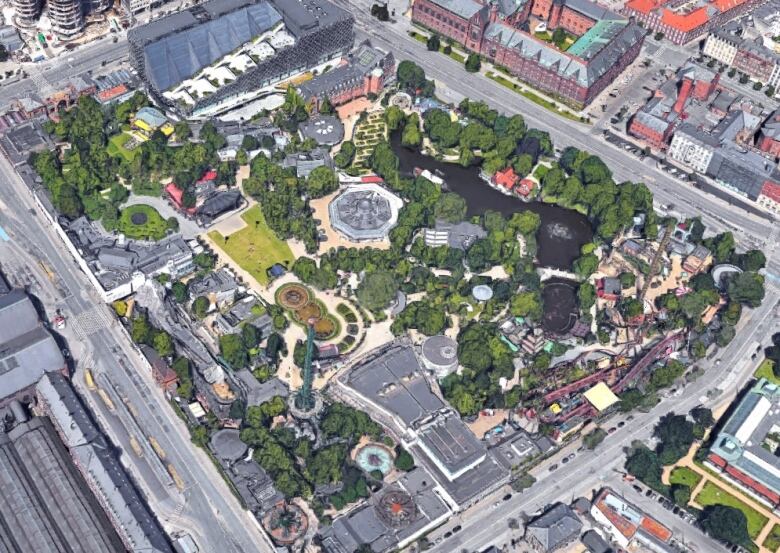 The proposed redevelopment for the East Exchange was compared to Copenhagen’s Tivoli Gardens. (Google Satellite)

Although the city planners were able to tap into federal and provincial funding — for projects to celebrate Canada’s 1967 centennial and Manitoba’s 1970 centennial — they still ran into budget constraints and were forced to curtail the CCRS’s focus to roughly 75 hectares immediately across from city hall.

The new area was bordered by Main Street and the Red River and between Bannatyne and Rupert avenues.

The news got worse for city decision makers, though.

They were trying, with the renewal scheme, to replicate urban renewal practices in Montreal and Toronto, but it wasn’t long before they realized they didn’t have the same integral ingredients to make the project a success. 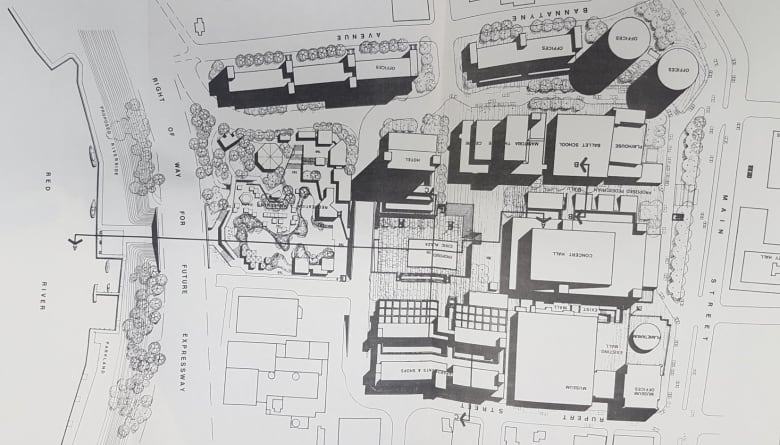 The Cultural Centre Renewal Scheme plan area was eventually reduced to an area between Main Street and the river and between Bannatyne and Rupert avenues. (City of Winnipeg Archives)

Demand for office space in Winnipeg was simply too low, as was the population growth, according to Joshua Warkentin and Marc Vachon, whose article The Rise and Fall of Winnipeg’s Modern Project (1958-1972): Causes and Failures, was published in 2010 in Prairie Perspectives, a publication of the Prairie division of the Canadian Association of Geographers.

As a result, it was also difficult to find investors who wanted to be part of the project. 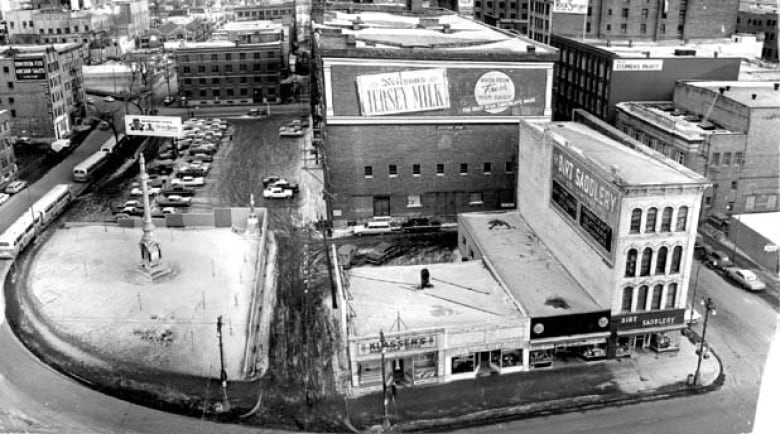 The buildings that would be razed for the construction of the Manitoba Museum, the planetarium, and the Centennial Concert Hall, as seen in February 1964. (University of Manitoba Archives/Winnipeg Tribune Photo Collection)

To make room for those projects, the area did lose two theatres — the Majestic and the Beacon — as well as the Cornwall Hotel, a police station and parking garage, and a city signals building, but the rest was spared.

“I think it’s a great thing that we dodged it,” Tugwell said.

“Sadly it wasn’t because we understood the value of saving it. It was because it really was too cost prohibitive,” she said, adding city administrators went on to make other “terrible decisions” such as tearing down several city blocks to build the Portage Place Shopping Centre in the 1980s, during another renewal plan.

“They tried to gentrify the downtown instead of making it unique.” 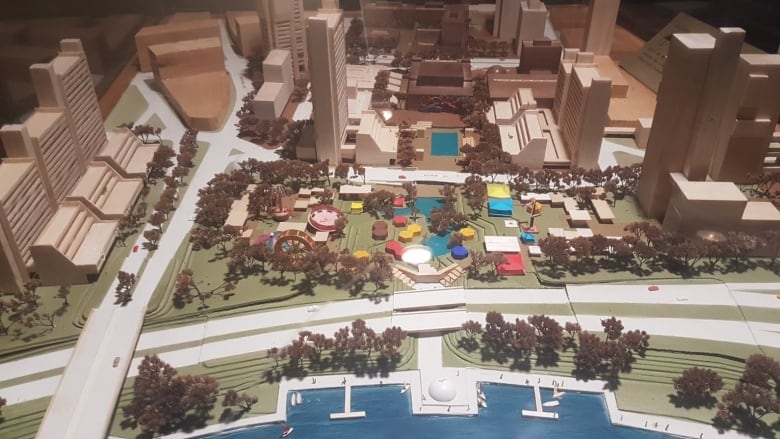 Access to the riverside harbour and marina would have been through a walking path that went under the Red River Parkway and connected to the amusement park. (Darren Bernhardt/CBC)

Not only were the East Exchange buildings saved, they have outlasted some of the projects built as part of the 1960s renewal. The Public Safety Building and its parking garage are now vacant and falling apart.

And there is a new initiative underway, called the Market Lands, to determine what should go there once those structures are demolished.

Ironically, it’s billed as “an exciting opportunity for renewal” in the area and an opportunity to celebrate the past.

The Exchange’s collection of brick and stone warehouses, financial institutions, and other buildings clad in terracotta — 150 buildings within 20 blocks — remains one of the most historically intact early 20th-century commercial districts in North America.

“Buildings built in those two decades following the late 19th century to early 20th century were made to last. That’s why so many cities are now trying to hang on to them,” Tugwell said. 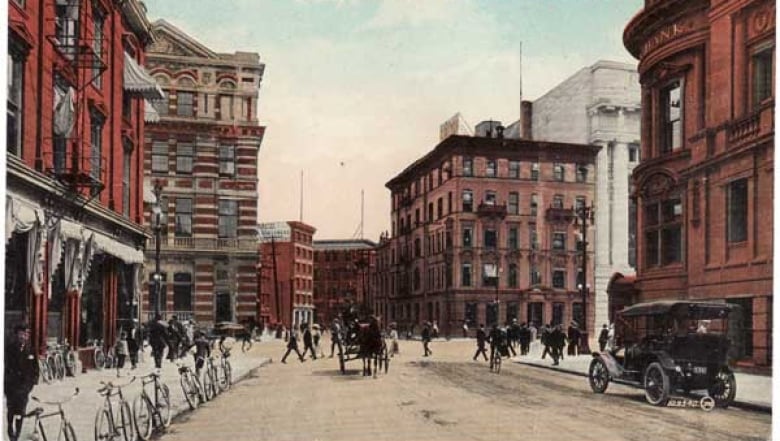 “I don’t think they grasped that back then, in that post-war era. Now it’s those buildings, that are 40-50 years old, that are in their own dire straits.”

Meanwhile, the Exchange has experienced a resurgence in the past two decades, with the restoration of many buildings, the opening in 2004 of Red River College’s Princess Street campus and the creation of studio-style condos.

The district hosts the annual Jazz Winnipeg Festival and Winnipeg Fringe Theatre Festival and is a focal point for independent retailers, restaurants, ​cafés, galleries, designers and artists, and is a period backdrop for the movie industry.

It’s also the second-largest historic warehouse district in the world, next to Barcelona in Spain, Tugwell said.

But, she cautions, without more funding support from the various levels of government it would be a short slide back to the situation the Exchange faced in the 1960s.

Despite their solid construction, time is taking a toll on many of the buildings. 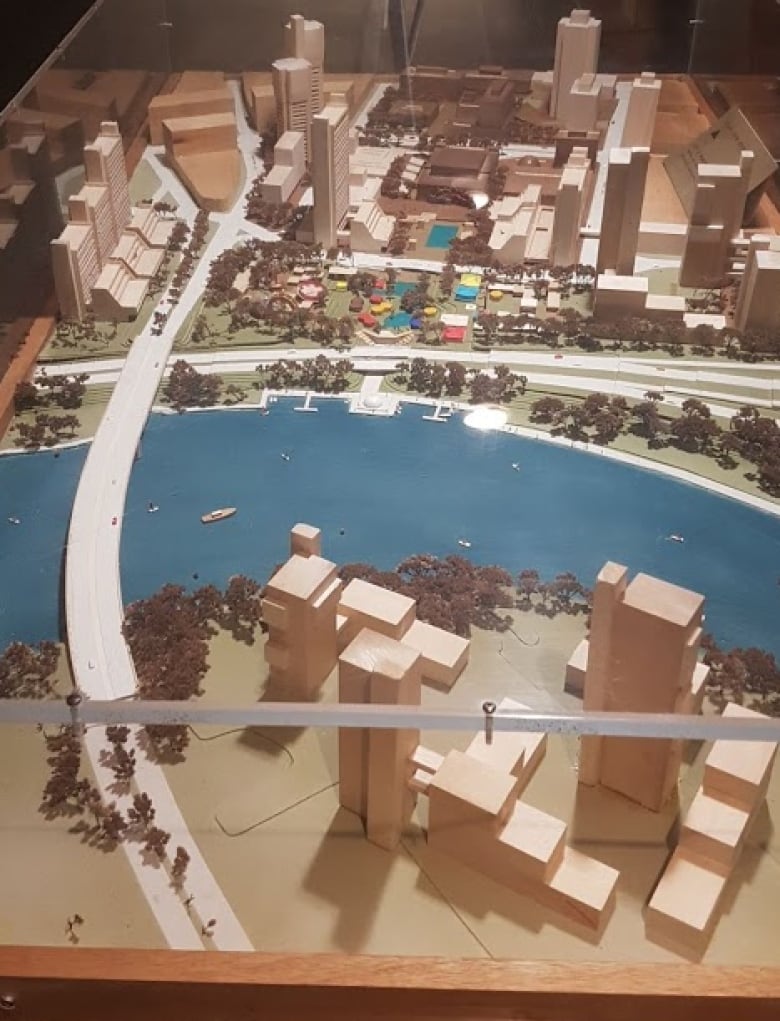 The extension of McDermot and Bannatyne would have taken vehicles across the river on an expressway into St. Boniface and through Whittier Park. (Darren Bernhardt/CBC)

“I’m not arguing that development has to happen, but when you’re talking about hundreds of millions of dollars going for new builds, where is the money for sustainable development to help these heritage buildings?”

We have to either start investing in the heritage sector seriously or it’s slowly going to die. Walking tours and tourism can only carry it so far.– Cindy Tugwell

There’s been “courtesy money” for lighting and streetscaping “but that’s fluff,” she said, noting heritage grants total $260,000 annually for the entire province.

“It’s such a pittance of money compared to the millions that go into new development. The disparity is disconcerting.”

Grants and tax incentives for the owners of the buildings in the district are needed or it won’t be long before the area is again facing an exodus, according to Tugwell.

“The Exchange District, when it comes to built heritage, has been revered as important by politicians. They love it when it comes to tourism but nobody really wants to put their money where their mouth is,” she said.

“We have to either start investing in the heritage sector seriously or it’s slowly going to die. Walking tours and tourism can only carry it so far.”