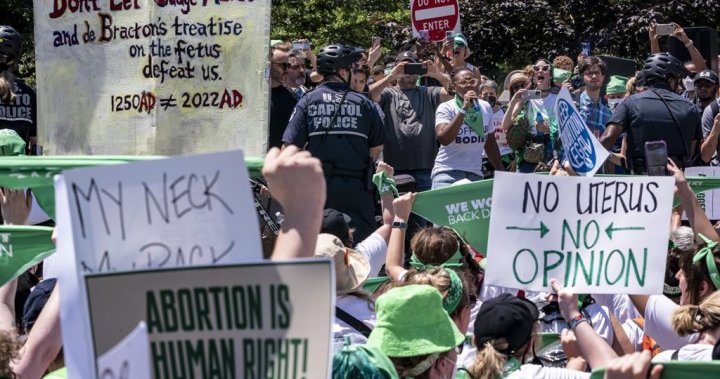 Around 100 people gathered at the Manitoba Legislative grounds on Saturday afternoon to protest in support of abortion.

Organizers say their goals were to raise awareness about abortion in Canada, and disrupt those protesting against it.

“I’m here to counter-protest anti-choice protesters to show them that we won’t stand for that rhetoric in Canada,” said Paige Mason from the Abortion Rights Coalition of Canada.

The large group walked down Memorial Boulevard with marching bands and signs, surrounding a group of about ten people who said they were against abortion.

Both rallies are reactions to the U.S. Supreme Court’s decision to overturn Roe v. Wade. It’s now up to each state to decide whether or not abortion is legal. Abortion has been legal in Canada since a Supreme Court decision in 1988, though access varies across the country.

The U.S. decision has sparked an outcry, rallies, and conversations across Canada and the U.S.


People attend an abortion-rights protest at the Utah State Capitol in Salt Lake City after the Supreme Court overturned Roe v. Wade, Friday, June 24, 2022. The U.S. Supreme Court’s decision to end constitutional protections for abortion has cleared the way for states to impose bans and restrictions on abortion — and will set off a series of legal battles. (AP Photo/Rick Bowmer).

After an hour, the smaller group left the grounds. Organizer Caleb Giesbrecht said despite disagreeing with abortion, he admires the other group’s passion.

“I don’t hate any of the individuals…I just have a deeper admiration for them, despite having a deep distain for their beliefs,” said Giesbrecht.

Winnipeg police were on the scene monitoring the groups, however, they did not intervene.

Julie Guard says she’s been protesting for reproductive rights since the 1970s, and that overturning Roe v. Wade should concern everyone in Canada.

“People here are feeling empowered (to protest) retracting rights that women have fought so hard for,” said Guard.

Guard says she believes the majority of Canadians support abortion, but that people should remain vigilant.