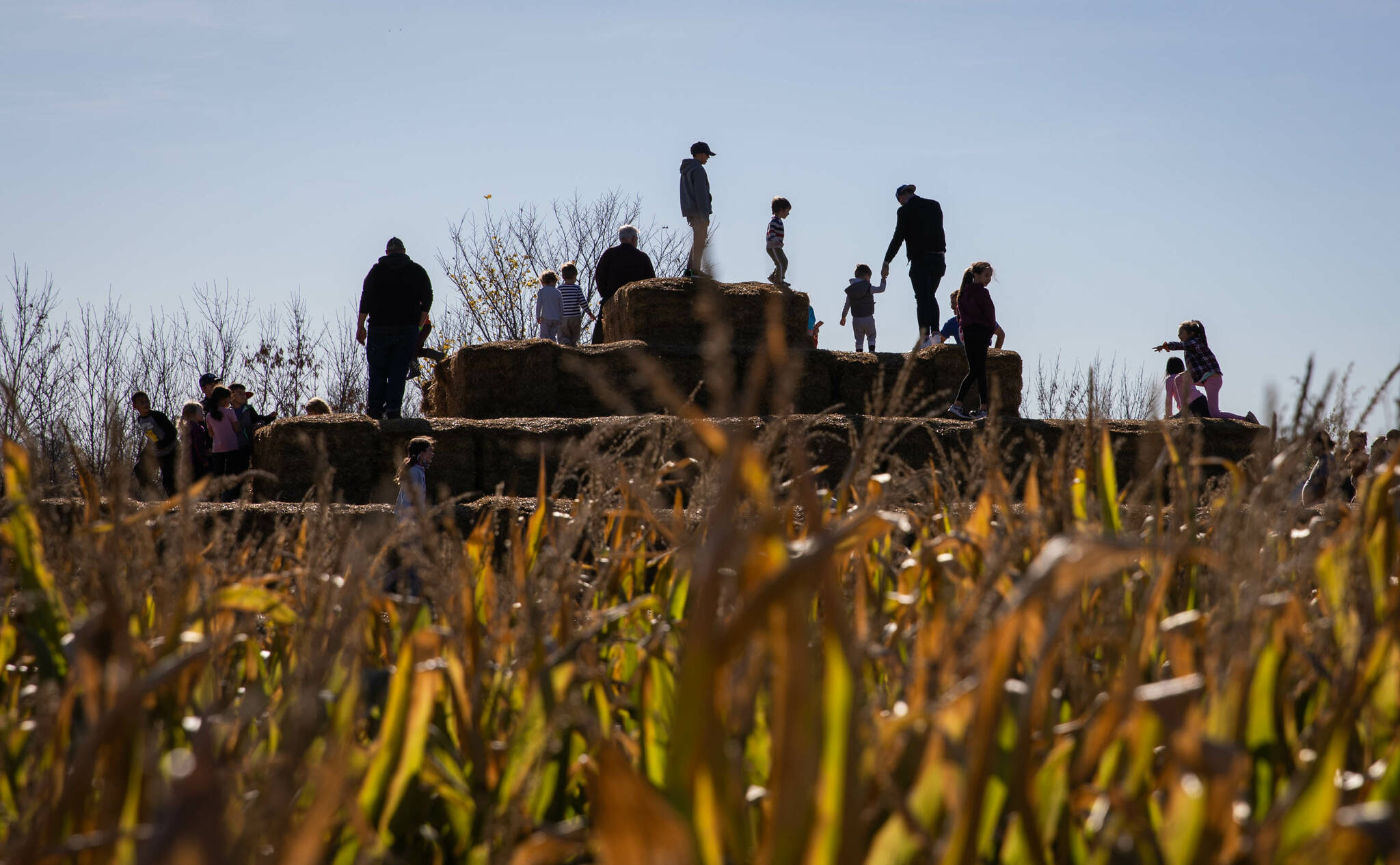 Autumn is upon us.

Although astronomical fall does not begin until Sept. 21, the telltale signs of the changing of seasons are all there. The leaves are starting to turn colour. The kids are back in school. The sun sets before 8 p.m. (7:52 p.m. today, to be exact.)

Corn mazes have become a family tradition for some Winnipeggers. A Maze in Corn also offers hay rides, pumpkin shopping and a the chance to be king or queen of the castle at the top of the haybale pyramid.

Indeed, the halcyon days of summer are behind Winnipeg for another year and you may have felt a month-long version of the “Sunday Scaries” through August as the daylight ebbed and the calendar marched ever-forward.

The realization summer is through can come with sadness — it always seems to go by too fast and end too soon — and it can even come with some panic. There’s no reason, though, for your mood to fall just because the leaves are.

Autumn can be awesome if you set your mind to making it such. Instead of playing Wake Me Up When September Ends on a loop and hibernating early, get out there and embrace the season, because there’s lots to do before flakes fly.

Yeah, yeah, we know what you may be thinking — pumpkin spice is cliché and basic; the purview of millennials and Instagram influencers.

But really, there’s a reason pumpkin spice — that comforting combination of cinnamon, allspice, ginger, nutmeg, and cloves — has risen to stardom and seems to appear earlier every year: it’s great. You’ll be happier if you embrace it, we swear.

If you haven’t been living the pumpkin spice life for a couple weeks already, there’s no time like the present. 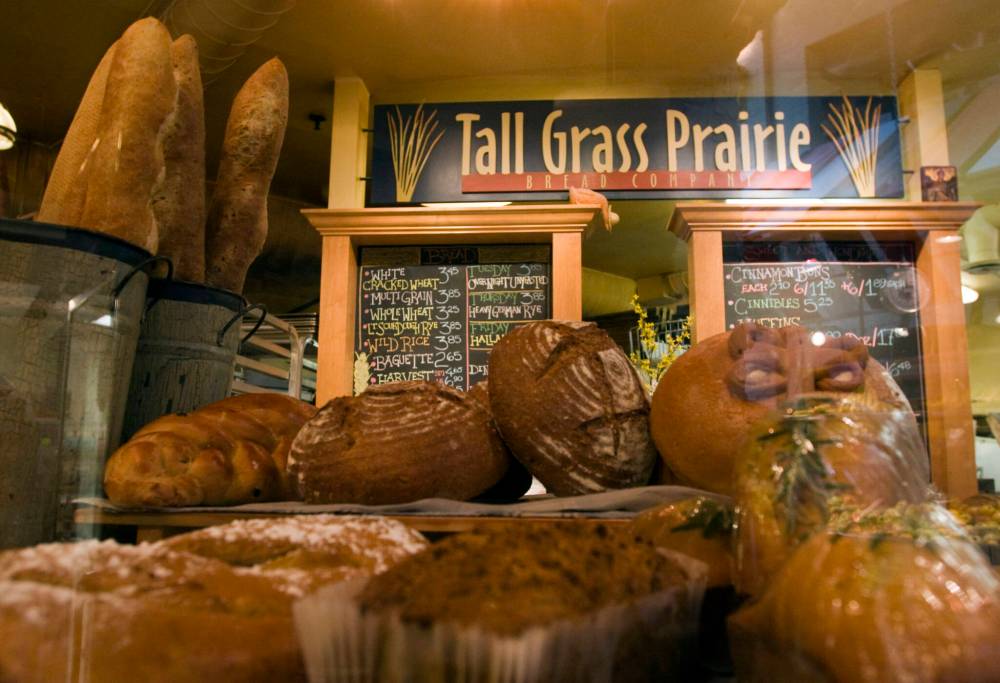 If pumpkin spice is your thing, there’s no shortage of it this time of year. Tall Grass Bakery offers pumpkin pie on its fall menu.

Start by popping into your local coffee shop for a pumpkin spice latte or another fall offering they’re brewing — there’s a lot more out there than Starbucks and Tim Hortons. Empty Cup, Fools & Horses, Harrison’s, Little Sister Coffee Maker, San Vito, and Thom Bargen are a few in Winnipeg’s independent coffee scene to try.

Nothing goes better with a pumpkin-spice drink than a sweet pumpkin treat: perhaps a slice of pumpkin torte from Goodies Bake Shop or hunk of pumpkin pie from Tall Grass Bakery. Or, hit up Oh Doughnuts for a pumpkin spice latte doughnut or Jenna Rae Cakes for a bottle of liquid pumpkin spice you can use in any baked-goods recipe of your own.

If you’re itching for cold treats (the weather’s stayed pretty good into September) visit Sargent Sundae for some of their pumpkin pie soft serve, Fete or whatever ice cream parlour’s closest to you to see what type of fall-themed sundaes and other sweet concoctions they’re swirling up.

After you’ve gotten your fill, have some fun by scouring the internet for the most outlandish pumpkin-spice products: a cursory search unearths products from pumpkin-spice beard oil to pumpkin-spice Pringles and pasta sauce.

Have some farmers’ market fun

Fall is prime time for snagging fresh, local corn, fruits, and vegetables for healthy and fulsome fall cooking. Pull on a comfy sweater and make a visit to get not only veggies but also baked goods and artisan gifts.

The St. Norbert Farmers’ Market has long been Winnipeg’s market par excellence, and is open every Saturday from 8 a.m. to 2 p.m. 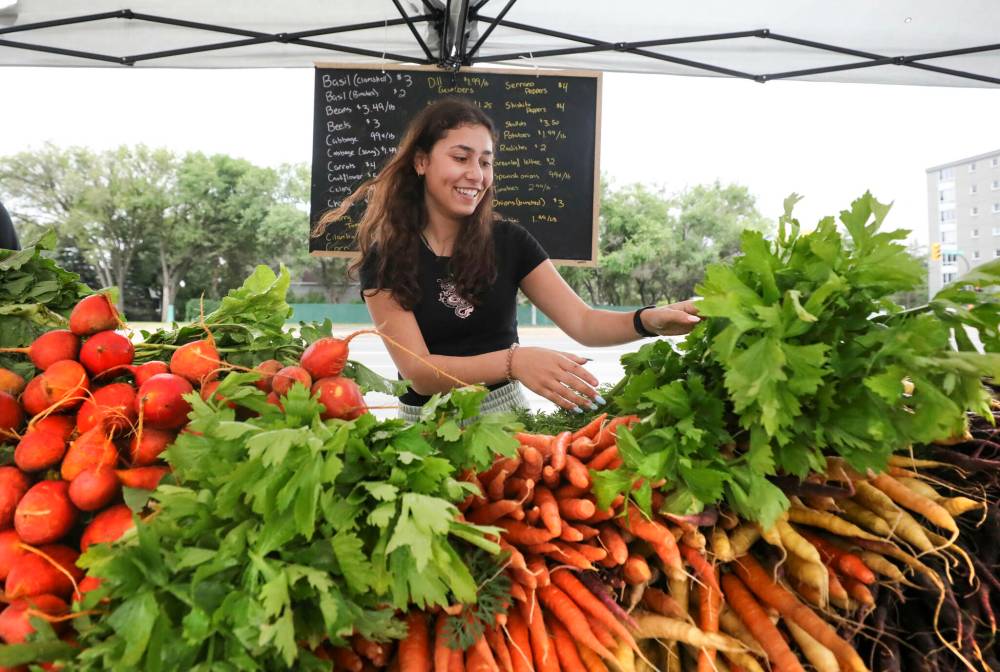 Fall is the last chance to snap up fruits and veggies at a farmers market in Winnipeg.

A handy harvest schedule on their website shows what you can expect to find during each season; for fall, it lists dozens of products that will be available over the next few months from apples to zucchini.

But wait, there’s more: FortWhyte Alive is hosting markets every Tuesday through the end of the month from noon to 7 p.m., while on the other end of town, the Tyndall Community Market at Tyndall Community Centre is open Saturdays and Sundays through Oct. 9.

You may be well past the age of all-nighters gaming or studying, but there will be a compelling reason to stay up and out late on Sept. 24.

Nuit Blanche literally translates into “white night,” which in the context of the French translation comes closer to meaning “sleepless night,” and is back for its first non-socially distant, non-pared-down event since before the pandemic. 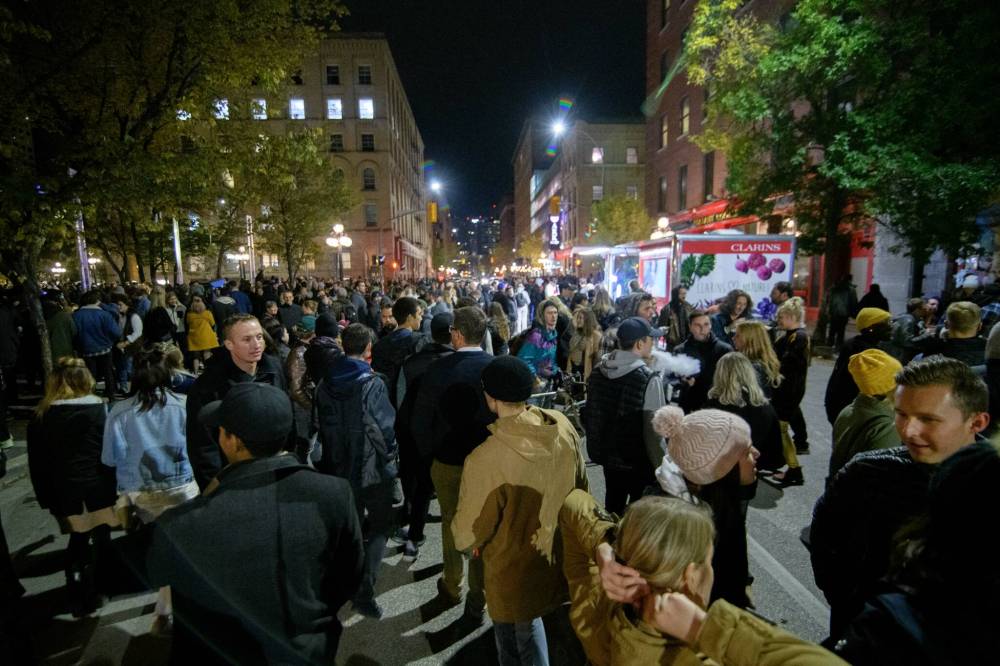 Nuit Blanche returns to the sreets of the Exchange District, downtown and The Forks Sept. 24. The annual showcase of contemporary art offers late-night exhibits and performances.

The annual celebration of contemporary art will take over the Exchange District, downtown, and The Forks beginning at 6 p.m., so walk, bus, cycle, taxi, or Uber down to enjoy the year’s featured artworks, Instagram-worthy exhibits and performances, and live events at a variety of small businesses.

Visit culturedays.ca for more details and a map of events; more are being added all the time.

Puck struck as in “enjoy the return of hockey,” not “get smacked by a flying black rubber disc.” The puck will soon drop on our teams’ 2022-23 campaigns.

Those asking all summer “is it hockey season yet?” don’t have to ask for much longer. The Winnipeg Jets’ first preseason home game is Sept. 27 and the regular-season home opener is Oct. 14 against the powerhouse New York Rangers. It’s an important season for the club as they have a new head coach in Rick Bowness and will try to get back into the playoffs after falling well short of expectations last season.

The Manitoba Moose, meanwhile, open their season at Canada Life Centre a day later, Oct. 15 against the Rockford IceHogs. The Jets’ AHL affiliate were a highly-entertaining and resilient team last season, but fell to the Milwaukee Admirals in the first round of the playoffs.

Speaking of entertaining teams, the high-powered Winnipeg Ice will be back in action beginning Sept. 24, when they open their season in Brandon against the rival Wheat Kings. Time for a road trip, perhaps?

The Western Hockey League club won an eye-popping 53 games last season, netting 317 goals and advancing all the way to the third round in the playoffs. The Ice should be a strong team again as they have many key players returning, but don’t play a home game until Oct. 29 (also against the Wheat Kings) due to renovations taking place at the of University Manitoba’s Wayne Fleming Arena.

It has the juice

We won’t belabour you with the rest of the lyrics to the viral Corn Song from TikTok, but let’s just say we can’t think of a more beautiful thing than a crisp fall evening at A Maze in Corn.

Of course, try to navigate your way through the maze — but no shame if you take one of the perimeter exits, who’s going to know? — but also take a hay ride, find the perfect pumpkin at the pumpkin barn, and climb to the top of the hay-bale pyramid to get a good look over St. Adolphe. When spooky season gets a little closer, you can also get chills and thrills at their haunted forest, where ghoulish and gruesome figures may just emerge from the stalks.

See www.cornmaze.ca for hours and tickets.

Quite a few performers from the Great White North will grace stages around the city in the next little while.

Winnipeg’s own Crash Test Dummies are in town for a pair of shows on Sept. 23 and Sept. 24 at the Centennial Concert Hall, where they’ll play hits from their more-than-30-year discography, accompanied by the Winnipeg Symphony Orchestra. 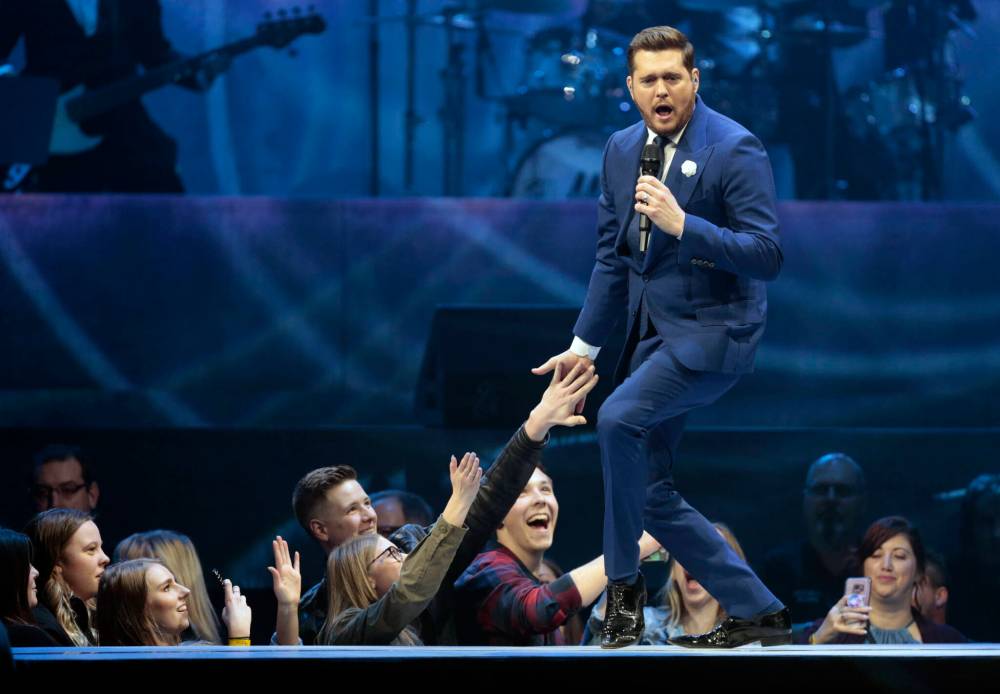 A couple days later and just down the street on Oct. 7, acclaimed crooner and overall heartthrob Michael Bublé will make a stop at Canada Life Centre as part of his Higher Tour. On Oct 20, alternative rockers Arkells — who hail from Hamilton — will stop there as part of their Blink Once/Twice Tour.

Heading back to Transcona, a pair of venerable dad-rock groups in Harlequin and Prism will appear at Club Regent for a double bill on Oct. 28 that’s sure to be filled with recognizable tunes.

Fans of The Handmaid’s Tale — either the original 1985 novel by Margaret Atwood or the Emmy-winning drama series — can now experience Offred’s saga in the dystopian world Gilead as a ballet.

The Royal Winnipeg Ballet’s version, the opener of their 22-23 season “is thrillingly reimagined through extraordinary athleticism and theatricality,” and promises “dark romanticism, enlightening truths, and forbidden desires.”

Performances take place at the Centennial Concert Hall from Oct. 12 through Oct. 16; see rwb.org for tickets.

No con… it’s back

Comic fans and cosplayers rejoice — ComicCon is returning to Winnipeg, with the always-colourful pop culture gathering set to unite fans of fantasy, sci-fi, animation, video games, and much more from Oct. 28 through Oct. 30 at the RBC Convention Centre. 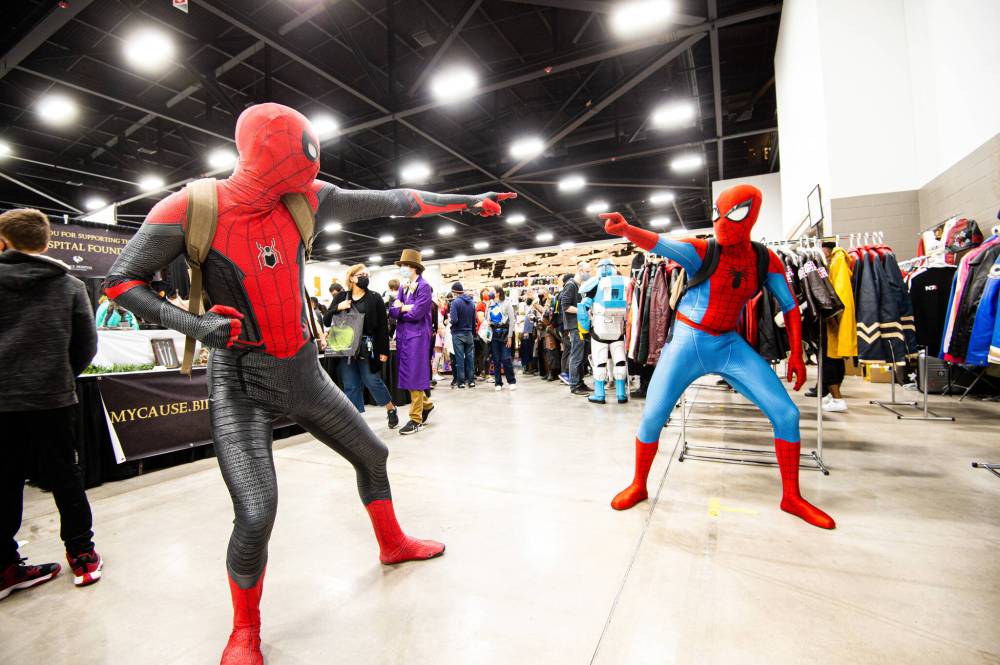 ComicCon returns to Winnipeg, Oct. 28-30 at the convention centre, if you know what we meme.

The festivities include an exhibition hall of more than 10,000 square feet with 450-plus exhibitor booths to shop from, panels and workshops to attend, costume contests to enter, and of course, celebrity guests to meet. Just a few of the famous folks who will be on hand are Incredible Hulk portrayer of yore Lou Ferrigno, the Kids in the Hall’s Dave Foley, and the Harry Potter franchise’s Matthew Lewis.

More details will be released as the event nears; visit comicconwinnipeg.com for tickets and more information.