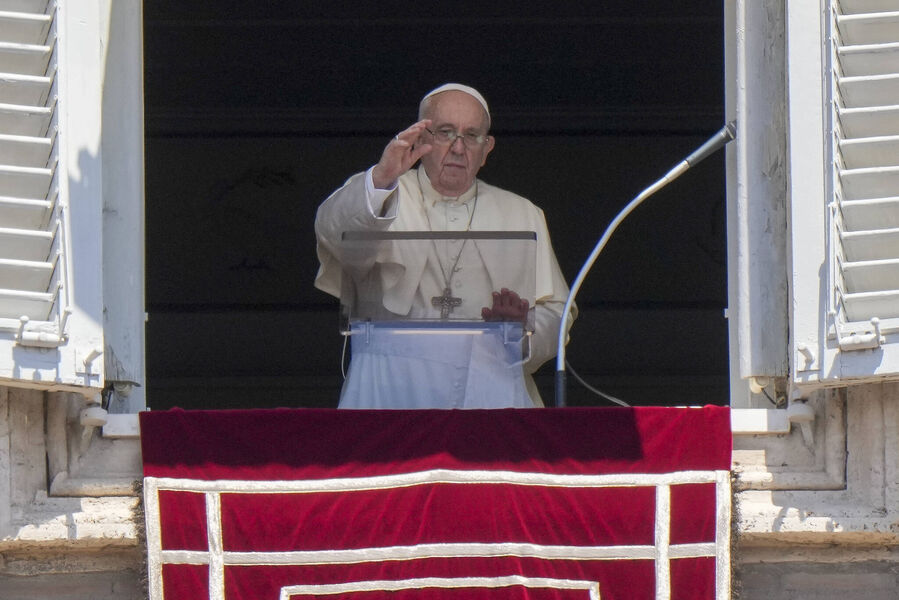 If everything goes according to plan, and his health holds up, Pope Francis will be in Edmonton this coming week.

So will I, travelling with a group of residential school survivors sponsored by the Archdiocese of St. Boniface. My hope is to tell the story of the Popes visit through their eyes, much like I tried to do when I was in Rome in March.

I wont be the only reporter there; about 600 journalists are expected to cover all or part of his July 24-29 visit to Canada.

For Indigenous people, and many other Canadians, the highlight of the visit will be the Popes apology, which will be delivered at the site of a former residential school south of Edmonton.

This apology is expected to be different from what he said in Rome in spring, when he delivered his personal apology to First Nations, Métis and Inuit delegates.

Nobody knows what he will say, but earlier this month Catholic News Service (CNS) reported all the speeches he has prepared for his trip to Canada begin and end with asking for forgiveness.

In the report from CNS, Pope Francis acknowledged the cruel way the Catholic Church collaborated with the Canadian government in uprooting Indigenous children from their families, cultures and spiritualities, forcing them to attend residential schools where many suffered emotional, physical and sexual abuse.

Cutting children and young adults off from their cultures was diabolical, he said.

Last Sunday, the Vatican released a statement from the Pope to Canadians in advance of his visit.

Dear brothers and sisters of Canada, as you know, I will come among you especially in the name of Jesus to meet and embrace the indigenous peoples, he said.

Unfortunately, in Canada, many Christians, including some members of religious institutes, have contributed to the policies of cultural assimilation that, in the past, have severely harmed indigenous communities in various ways, he added.

Now I am about to make a penitential pilgrimage, which I hope, with Gods grace, will contribute to the journey of healing and reconciliation already undertaken.

For Archbishop Donald Bolen of Regina, the visit is a time for healing  and the Pope, as head of the Catholic Church, is the right person to initiate it.

In many Indigenous cultures, when there are issues between families, the fathers of those families must meet to discuss and heal those divisions and wounds, he told CNS.

Pope Francis is seen as the father of our global Catholic family. In this sense, it is important that he meet face-to-face with the leaders of the Indigenous, Métis, and Inuit families who, even today, continue to be affected by the harms caused by the residential school system.

The Pope, he added, consistently calls the church to walk with others in all manner of woundedness. This is particularly true when those wounds have been caused by the church

Cassidy Caron is president of the Métis National Council; she was in Rome to meet the pontiff in March.

Caron told CNS the Popes apology in Rome was the first step in our journey toward truth, reconciliation, justice and healing.

The next step, she said, is for him to repeat the apology in Canada where the highest number of survivors, elders, families and communities would be able to attend.

She added she hopes the Vatican and the Canadian Conference of Catholic Bishops will fully commit to walking the path of reconciliation following the apology, understanding it will be an ongoing process, and that it will take time.

An apology can be achieved by a text, whereas reconciliation requires human encounter, he told CNS.

And saying sorry once isnt enough, he said; it is always worth repeating. You dont just say it once and be done with it.

Canadian Catholics also have a role to play, he said  even if they didnt commit those abuses in the past.

They are called to care for those who today suffer the consequences of colonialism, racism and cultural repression, Czerny said. The sins of the past live on, and everyone has a share in overcoming them.

The Free Press is committed to covering faith in Manitoba. If you appreciate that coverage, help us do more! Your contribution of $10, $25 or more will allow us to deepen our reporting about faith in the province. Thanks!
BECOME A FAITH JOURNALISM SUPPORTER

For example, when the Pope visits the Sacred Heart Church in Edmonton, it will include a blessing of the four directions and a smudging  as the Pope enters the church, an elder will process ahead of him with a bowl of smoldering cedar, sage, sweetgrass and tobacco.

Theres a lot riding on this papal visit, for Indigenous and non-Indigenous Canadians alike, and also for Catholics and non-Catholics. Terrible things were done to Indigenous children in the name of Christ for decades. All Christians have a stake in the Popes visit, the apology, and what comes next.

And there will be many nexts. The papal visit is not the end of the journey; it is just the start. It reminds me of what Winston Churchill said in 1942 when the tide of the Second World War was just beginning to tip in favour of the allies.

This is not the end, Churchill said. It is not even the beginning of the end. But it is, perhaps, the end of the beginning.

John Longhurst has been writing for Winnipeg’s faith pages since 2003. He also writes for Religion News Service in the U.S., and blogs about the media, marketing and communications at Making the News.