A spot of ‘religion and sweetness’ – Winnipeg Free Press

Lisa Gardewine thinks she must have passed by the Holy Trinity Ukrainian Orthodox Cathedral on Main Street “over a thousand times,” but she had never been inside — until Thursday night.

That’s when the Winnipeg Architecture Foundation sponsored a tour of the building, which was rebuilt after it was extensively damaged by a fire in 2016.

“An opportunity to get inside was awesome,” Gardewine, the past president of the Heritage Winnipeg board, said. “To think we have something this iconic in Winnipeg… I never expected the beauty that is inside it.”

Gardewine was one of about 60 people to take in the tour, which featured a presentation by artist and designer Ben Wasylyshen.

Wayslyshen, who has worked on the building for 30 years as a designer, was responsible for repairing the cathedral after the fire. It took about three years to do the work.

Alternating between English and Ukrainian — there were some recent arrivals from Ukraine in the audience — Wayslyshen passionately described the meaning behind the icons, windows, paintings, chandelier and Iconostasis, the ornate carved wooden wall at the front of the church.

This “house of God” is a “place of peace and celebration for our souls,” he said of the cathedral.

Started in 1949, the church was modelled after the National Ukrainian Orthodox Cathedral in Kyiv. The first worship service was held in 1962. 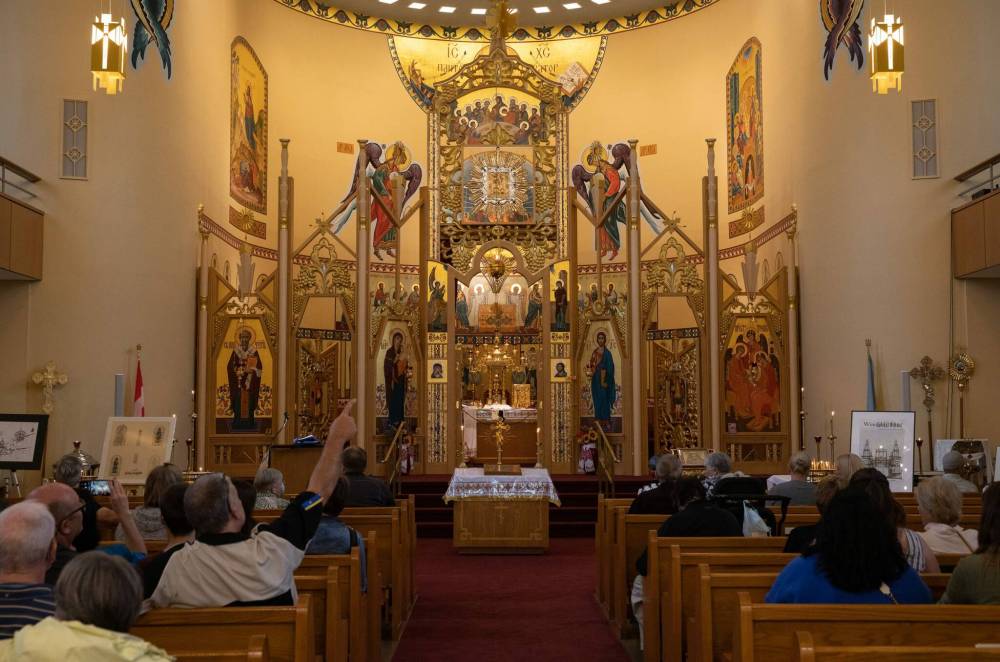 After the fire, which was caused by arson, the church had to be painstakingly restored, Wayslyshen said.

“The fire was heartbreaking,” he said, noting everything inside was blackened and damaged by water and smoke.

To conduct the repairs, Wayslyshen, who is also a member of the cathedral, immersed himself in its history and in the history of Ukrainian Orthodox faith and worship.

“The Ukrainian Orthodox Church has been around for over a thousand years,” he said.

For him, the history of that faith is about “beauty,” something he endeavoured to recreate inside the cathedral. 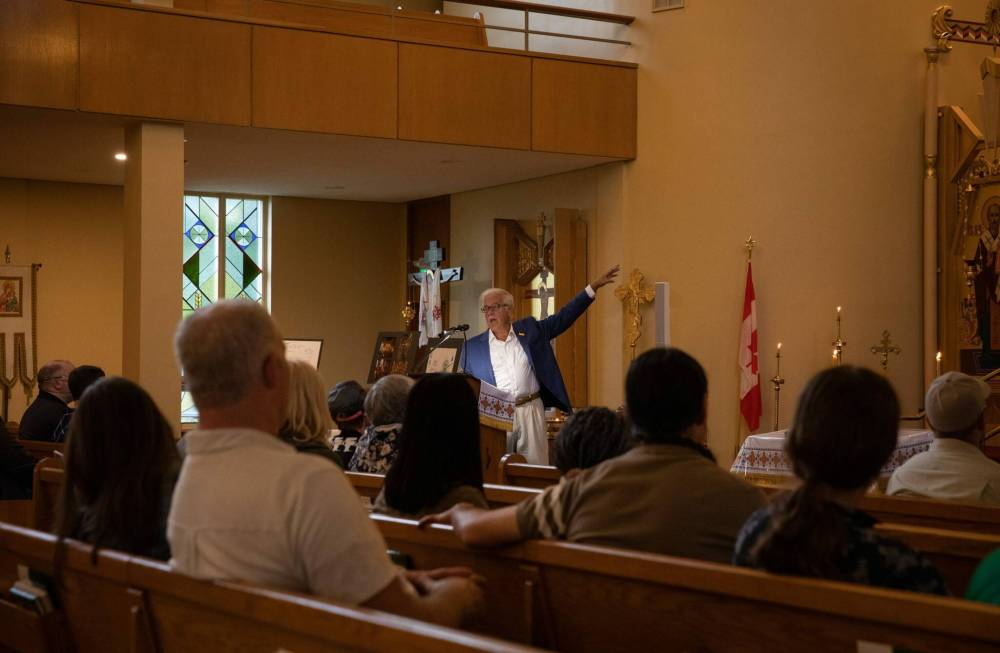 Ben Wasylyshen has worked on the building for 30 years as a designer and gave a presentation during the tour.

Wayslyshen was able to add some modern twists when doing the reconstruction; a stained glass picture of Mary shows her holding a maple leaf, and there are stalks of wheat — a nod to the importance of that cereal crop in Manitoba and Ukraine — in other windows.

“As sad as the arson was, it gave me a chance to add those elements,” he said.

Wayslyshen said he was most proud of the work done to rebuild the Iconostasis, which separates the priests from the congregation during a worship service.

“It is the holiest of holy places,” he said, praising the workers who carefully rebuilt it after the fire. “You can’t tell what was original and what was rebuilt.” 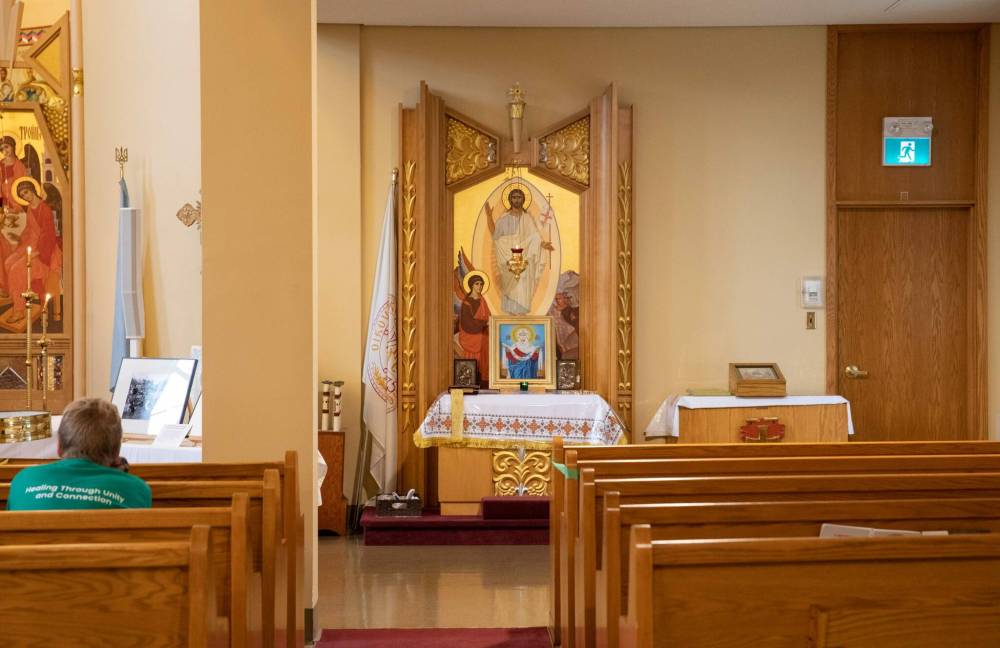 The Holy Trinity Ukrainian Orthodox Cathedral was rebuilt after it was extensively damaged by a fire in 2016.

Altogether, the church “tells the story of Christ,” Wayslyshen said, adding. “It’s a great honour for me to share it with you. This church has come back stronger than ever. It is a celebration of faith and beauty and strength of the community.”

Gene Kirichenko said participating in the tour was a way to celebrate how the church “helps people get closer to God.” He went on the tour “to learn more” about the church and its reconstruction.

Tim Osachuk wanted to tour the building because of the “spirituality of the space.” As a member of the cathedral, the tour was also a way to “celebrate that spirituality with others, to let them see its beauty.”

The Winnipeg Architecture Foundation is made up of architects, historians and other people with a passion for Winnipeg’s architecture.


The Free Press is committed to covering faith in Manitoba. If you appreciate that coverage, help us do more! Your contribution of $10, $25 or more will allow us to deepen our reporting about faith in the province. Thanks!

John Longhurst has been writing for Winnipeg’s faith pages since 2003. He also writes for Religion News Service in the U.S., and blogs about the media, marketing and communications at Making the News.

Kings and Jets take the ice in Western Convention motion