DALLAS — The Winnipeg Jets spent American Thanksgiving far away from the ice, hanging out in a private suite at “Jerry World” watching the Dallas Cowboys host the New York Giants in a marquee holiday matinee.

“First NFL game for me. Pretty excited. And the Cowboys are my team,” defenceman Josh Morrissey told me a day earlier in Minnesota.

Given how his own squad went on to perform later that night — an absolute stinker in St. Paul that ended with a lopsided 6-1 loss — Morrissey and his teammates should be thankful their veteran coach, Rick Bowness, didn’t go completely old school on them by cancelling their scheduled day off and bag skating them at an impromptu practice.

With key players such as Nikolaj Ehlers (left) on the sidelines with injuries for extended periods of time, it wouldn’t hurt if Jets’ GM Kevin Cheveldayoff dipped his toes in the trade waters for fill the gaps in his lineup.

Don’t think for a second someone like Mike Keenan wouldn’t have pulled such a stunt.

That would be an overreaction, for sure. The most recent result aside, Winnipeg is still sitting pretty right now at 11-6-1, holding down a playoff spot as they prepare to face the Stars on Friday night in the heart of Texas. (7:30 p.m. CT). It’s important to maintain perspective and remember the NHL season is a marathon, not a sprint.

You know what wouldn’t be an overreaction? General manager Kevin Cheveldayoff vigorously working the phones, trying to find a way to reward his team for their surprisingly strong start and throwing them a much-needed lifeline.

If it wasn’t clear prior to getting walloped by the Wild, it should be now: The depleted Jets forward group desperately needs an injection of talent.

Nikolaj Ehlers is out at least two more months, maybe longer, having played just two games before missing the past 16 and counting with a sports hernia that was surgically repaired on Wednesday. Mason Appleton won’t return to the rink until early 2023, either, as he heals from recent wrist surgery. Morgan Barron is still probably a couple more weeks away, too, as he recovers from a similar procedure.

That’s three key forwards who were in the top nine on opening night and being counted on to provide primary (Ehlers) and secondary (Appleton and Barron) offence on a team that had plenty of question marks about its depth up front even before the new campaign got underway and the injury bug bit early and often.

Following the game at Xcel Energy Center, Bowness went out of his way to praise the trio of David Gustafsson, Jansen Harkins and Mikey Eyssimont.

“Our best line was the fourth line,” he noted.

They sure were. While it’s great those three players put in a solid night’s work, it’s actually a major problem. Fact is, there are too many players thrust into unfamiliar roles right now due to the manpower shortage. While the current Band-Aid being applied is able to mask the pain on some nights, the wounds remain deep.

Veteran Sam Gagner should not be skating on a No. 1 line at this stage of his career, but there he is alongside Mark Scheifele and Kyle Connor. That’s not a knock against Gagner. He’s still a very productive player when used correctly. Which, in his case would be in a bottom six role. He doesn’t have the wheels to keep up with his speedy linemates, and that’s becoming quite evident.

The thing is, I’m not sure there’s a better available option at the moment on the active roster. Harkins? Eyssimont? They have the speed, for sure, but they would represent a significant drop in skill.

Cole Perfetti is having some struggles on the second line with Pierre-Luc Dubois and Blake Wheeler. He’s taking a physical beating many nights, and that’s a concern for an undersized player who had last season end early with shoulder and back injuries. He looks like someone who could benefit at times from a reduced role — especially when facing big, heavy opponents such as Minnesota and Calgary — maybe bump him down to the third line to avoid always facing the other team’s best.

Just like Gagner, however, what other option does Bowness have at this point but to keep rolling him out there?

I suppose there’s the farm, where rookies Brad Lambert and Chaz Lucius are currently getting their feet wet with the Manitoba Moose. That would be quite the leap of faith, not to mention enormous pressure, to put on their young shoulders at this stage.

It would be one thing if the Jets were simply rebuilding this year and not poised to make any noise. Riding it out with the status quo and taking whatever lumps come your way would be the safe, smart play. 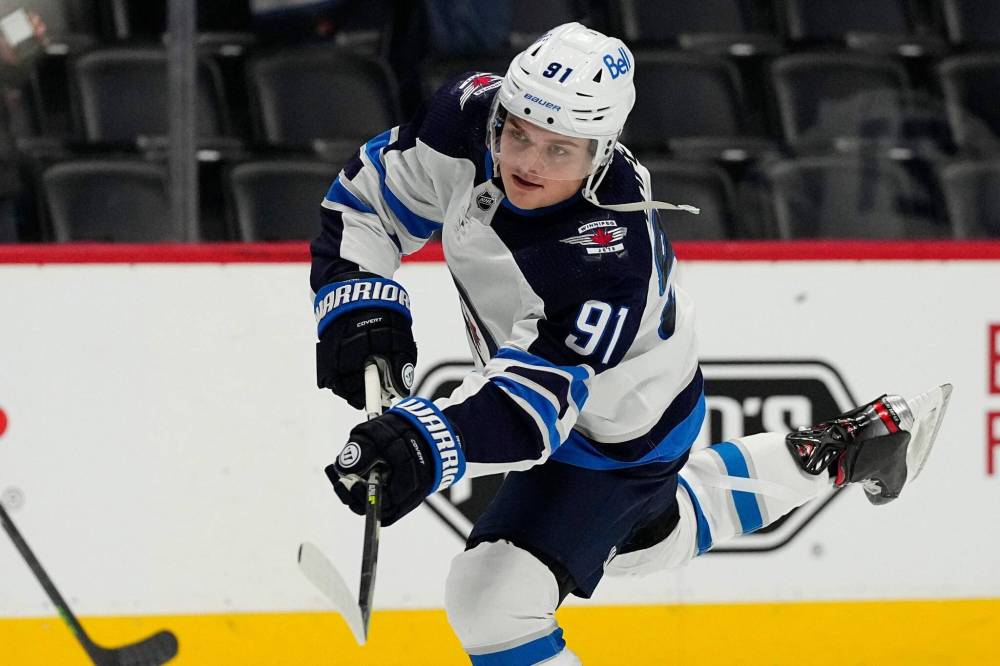 Cole Perfetti has been taking a physical beating and having some struggles on the second line with Pierre-Luc Dubois and Blake Wheeler. (Jack Dempsey / Winnipeg Free Press files)

Give their degree of success so far — Winnipeg entered play on Wednesday tied for the No. 1 winning percentage in the Central Division, No. 2 in the Western Conference and No. 4 in the NHL — calling an audible on the fly seems like the best plan.

They certainly have the cap space to do it, unlike recent years when they were up against the ceiling. Why not try to weaponize that flexibility?

There was plenty of pre-season talk about the Jets potentially moving a veteran defenceman for forward help, which would also clear a spot for a young blue-liner such as Ville Heinola to land a full-time role.

That didn’t happen. It would now be surprising to see Cheveldayoff ship out someone like Dylan DeMelo, Brenden Dillon or Nate Schmidt at this point, with Winnipeg among the league-leaders in goals against thanks to improved defensive play under new systems implemented by the new coaching staff.

Maybe it’s Heinola himself who actually becomes the trade chip? Or someone like Logan Stanley, who is working his way back from a broken foot.

There are contenders out there, such as Toronto, desperately looking to upgrade on the back-end and there are plenty of re-tooling and re-building squads willing to move more established players for younger, up-and-coming talent.

There’s no question the Jets have had far more good nights than bad ones so far. They are one of the pleasant surprises of the season. It feels like the line between success and failure right now is razor thin and it wouldn’t take much for the winds of change to start blowing in the wrong direction.

As Bowness told us the other day when asked if he might be in Cheveldayoff’s ear, “That’s management’s call, not mine. I coach the players that are here. That’s my job.”

Indeed. But there’s no question the bench boss has the confidence of management to speak his mind, such as when he dropped a pre-season grenade by stripping Wheeler of the captaincy.

I suspect he might have plenty to say after Wednesday. Perhaps something along the lines of “Uh, Chevy. A little help here?”